Lesson 5 from: How to Dress for Success and Build a Personal Brand 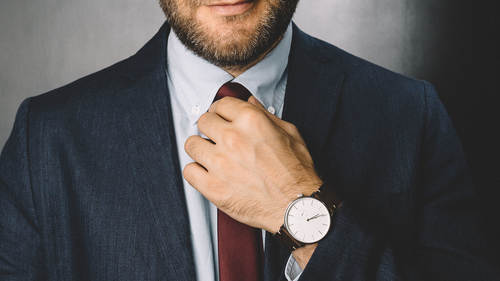 Lesson 5 from: How to Dress for Success and Build a Personal Brand

Evaluate and Improve Your Online Presentation

Let's talk about setting the tone for success. That's your preparatory work. That's your image assessment, your image team. Now let's start to get more concrete. Let's start to think about some steps that we can all take to make improvements to get better. If people focus negatively on your appearance, your actions, or your words, then your image needs polishing. These are your three areas of action. Appearance, actions, words. If my uncle Peter were here, he would say we're gonna go through each of these. My uncle Peter is the person who I first learned to teach this course from. He used to say, as I go through each of these areas, my challenge to you is that you think about a small improvement you could make in each one. All of us can get a little bit better. No matter where we are, there's always room for improvement. I know, I know, you're perfect. I am too. It's usually not true. We all have room for improvement. All right, I'm gonna give something away right now. I've mentioned I...

'm from Vermont. That's New England. That means I'm a Patriot's fan. Yes, Tom Brady. For the other, whatever, 43 states, in the United States of America that's not a comment I make easily because I know that it starts to introduce some distance between us. I really like Russell Wilson, too. He's great. The last talk I gave was in Atlanta. I really like Matt Ryan, too. He's great. I admire Aaron Rodgers. Remarkable quarterback. Throws a ball incredibly well. I'm pretty sure that some of those other quarterbacks I mentioned work with the same throwing coach that Tom Brady works with, a man named Tom House. He's an amazing throwing coach, works with a lot of professional major league baseball pitchers as well as NFL quarterbacks. You talk about how social media's part of your image, Tom Brady released a set of social media videos that are part of him building a brand. In it, he shows himself working with the throwing coach Tom House. It's a remarkable little section. In it, House is talking about the way he works with these professional athletes and how some people that he works with, and he's watched thousands and thousands of hours of peoples throwing. He says, I don't even see people anymore, I just see stick figure throwing motion. I see it in fractions of seconds, tiniest little infinitesimal fractions of seconds, and I'm helping these incredible athletes get just a little bit better. Some people come in here, they get 10% better, they get 15% better. With these guys, they're looking to get 1% better, fractions of 1% better. You don't need to be from New England, doesn't need to be Tom Brady, can be whichever sports figure, celebrity, whoever you see as an example of excellence in their field, I guarantee you that person works hard to get just a little bit better whatever level they're at. That's how they got to that level to begin with. We don't all need to be Aaron Rodgers, Russell Wilsons, Tom Bradys, Matt Ryans. We all have room to improve, and I think those examples help remind us of that. These are three areas where anyone can make improvements, even if what you do isn't throw a ball for a living. People will relate to you, they will interact with you, they will make assessments and judgements about you based on your appearance, your actions, and your words. This is an opportunity, not an obligation. This is the framework through which you can approach this material that will have the greatest benefit for you. Approach as an opportunity not an obligation. Someone's not likely to come up to you and say, you know, it's really time you did an image assessment. It's time you notched up your wardrobe just a little bit, but if you came into work looking just a little more polished than you ever did before, and that became a consistent part of how you prepared for your day at work every day, people will notice. It will make an impression. It will have an effect on the people that you work with.