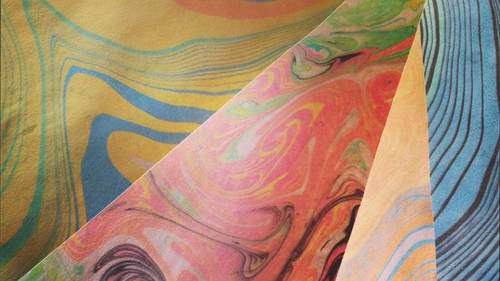 The next thing I want to do is I want to show you another way. Um, that you can deal with the inks versus dropping it in with the paint brush. And with each of the little kits are these little floating paper tabs? Does everyone have those at their tables? Okay, so these come with assuming a gashi inks you simply their perforated you punch them out um and let's go on ahead and punch out. I don't know about three of them, and what we're going to do is the's will float on the surface of the water so just gently going to drop it on the surface there. And this is what these allow us to dio these allow us to take our drink bottles and drop a drop or two of the ink onto the surface. If we were to do this directly onto the surface of the water, it would immediately sink underneath the water and very little little of it would remain floating. But what thes tabs do is they break the fall of the ink, they give it sort of a cushion and they allow it to spread out so let's, give it a try and see ho...