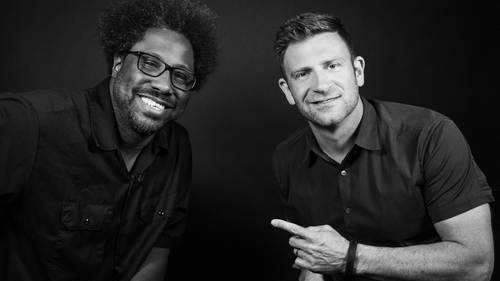 I believe he’s the first comedian I’ve had on, but what’s super interesting is that you’ll hear us touch on so many of the familiar themes that often come up on this show – the same nearly universal challenges that all creators deal with. But what really stands out to me is how he’s a great example of the “10-year overnight success.” Although he got onto the mainstream radar just a few years ago, he’s been in the game since the mid-90s, grinding and grinding and slowly clawing his way to the top. THIS is how it works – virtually nobody is met with instant success, and his story is a great (and hilarious) example of this.

W. Kamau Bell is a veteran standup comedian, the creator and star of the hit CNN show “United Shades Of America” which is kicking off its 2nd season, host of a couple podcasts, one of which has probably the best title of any podcast ever – “Denzel Washington Is The Greatest Actor Of All Time Period” – and author of a bestselling book among many other things he’s been part of over the course of his career. The word prolific does not even begin to describe this man.

Wow! Thank you Chase for having him on. I stumbled upon United Shades of America this year and I've seen all the episodes up to the current season 4. Just when "stuff" has been whirling around in my head, thoughts of quitting photography, etc. I watch this interview with Kamau and kept saying to myself, I have doubts and afraid of not being successful too! This was good food in helping me cope with that fear and self-doubt. I am a big fan of Creative Live and thank you for bringing this to us.