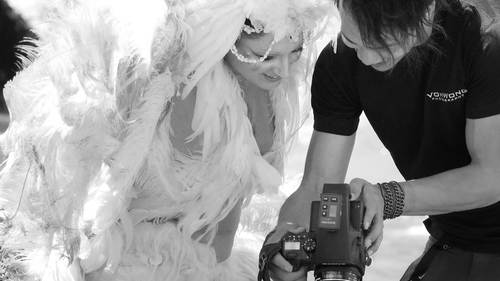 (applause) Hey everyone, how's it going? Welcome to Photo Week 2017! Can I get a shout out? (cheering) Awesome, I love the energy here in Seattle. For those of you who are tuning in from all over the world, I wish you could be here with us, but we're doing everything we can to make your experiences as awesome as the folks who are actually here in the crowd. Insane lineup all week long. And tonight, I get the great honor of introducing someone that I met a handful of years ago, and I love circle. Who doesn't love circle, right? It's the shape of our lenses, it's the way we think. And in 2012 I was at my photo studio and a young man, as a lot of folks have on occasion, just drop in and say I was hoping to sit down and connect with another fellow photographer. And in walks Ben Von Wong. And he and I had a conversation, this was again 2012, and we've talked about this just a little bit before I came on stage here, and what I remember from that moment was the vision, the passion, and the ...

Photographs are most powerful when seen. But how do you create images that get people talking and sharing your work? CreativeLive is thrilled to bring you Benjamin Von Wong, a conceptual photographer known for his art and documenting his adventures and creations. With projects that have taken the world by storm such as "Saving Eliza" and his most recent "#MermaidsHatePlastic" Ben Von Wong is using his talent, knowledge, and art to focus on conservation and social impact projects. In this keynote presentation, Ben shares just how to ""Ignite Conversation"" and create photographs that are shared and talked about.

I also have had the great pleasure of working with Ben, such an inspirational influence and a one of a kind human being.