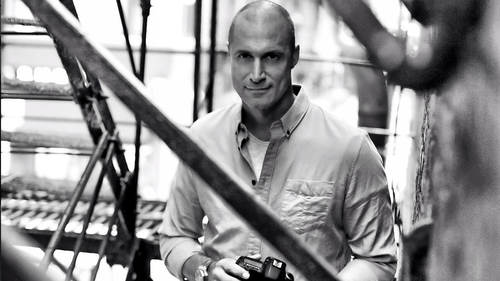 Hey you guys. Welcome to Creative Live, thank you so much for joining us. I recognize a lot of faces here from the previous couple days here, we're at Photo Week 2017, give it up. (crowd cheers) Awesome. A lot of you folks standing at the back, welcome, it's your first time here at Creative Live, make yourself at home, we got beers before, but I know why you're here. I promise, I was just speaking to him backstage. You guys are in for an amazing treat, reminder, we've got thousands of people tuning in from all over the world so it's an international audience. We realize just not too long ago, we've got people from Sweden, from China, from Seattle, from San Francisco, from New York, from Dallas, all over the world. And you're all in for an amazing treat. Nigel Barker is a photographer, of course you know him as that, probably first and foremost, but he's so many other things. He has judged, I couldn't believe this, 18 seasons of America's Next Top Model. 18 seasons, I'm like, you look g...

CreativeLive is excited to bring you internationally renowned photographer Nigel Barker. Nigel will discuss the business of photography and how to make your vision a reality across multiple platforms. With 20+ years of experience in the fashion and entertainment industry, Nigel is also a successful author, director, and humanitarian. He served 18 seasons as photographer and judge on the hit TV show America's Next Top Model and won the "Film Heals" Award for Humanitarianism for "Dreams Are Not Forgotten".

Honestly, that was the best presentation I have heard ever! He is so positive and inspiring... Everything is said was from a happy place! Highly Highly recommend this feel good video...

Thank you Nigel, that was a fun and inspiring talk, and I believe there are several things you said that will always come back to my mind every time I'll hold my camera.

this is what i need! to see outside the matrix, and record the real world! i feel like calling it quits sometime, but every time i have that down moment, i come to creative live and find inspiration, and nigel just gave me back that up moment!