Lesson 1 from: Entrepreneurship & Presenting Your Best Self Online 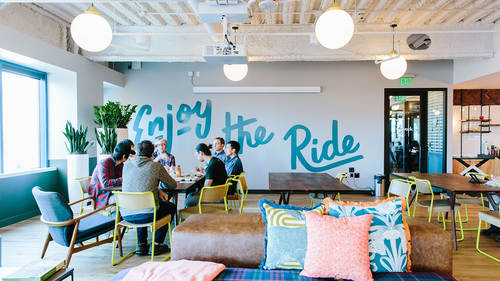 Lesson 1 from: Entrepreneurship & Presenting Your Best Self Online

1. Entrepreneurship & Presenting Your Best Self Online

Hey everybody, how's it going? I'm Chase Jarvis, I'm the founder and CEO of CreativeLive, which is the world's largest live-streaming education company. We're focused on the creative entrepreneurial and thought leader spaces, helping people live their dreams in career, in hobby, in life. I have with me an esteemed panel, but before I get to those folks, I wanna give a shout-out to WeWork. There's an incredible overlap between the WeWork community and the CreativeLive community of people who wake up and think about creating something every day. And they are basically christening or welcoming their new space here at Westlake Tower in Seattle. So a big shout-out to Chad and the crew for hosting us. Can we give them a round of applause for welcoming us into their house? (audience applauds) Thanks a lot, man, appreciate it. And one of the things that we're gonna be talking about today and I think the key thing is putting forward your best online self. In addition to the spirits, which we ar...

T.A. McCann is a serial entrepreneur having founded 6 companies including Rival IQ (marketing analytics) and Gist (social address book).   He also spent time at Blackberry (after they acquired Gist) and Microsoft.  He is an active angel investor and board member in companies like Creative Live, Assi.st, Inkwell Media, Guidant, and Full Contact.  Prior to his startups, he spent many years as a professional sailor, winning the America's Cup and completing the Whitbread round-the-world race.
SEE INSTRUCTOR'S CLASSES

Jenni Hogan is an Emmy award-winning journalist turned entrepreneur. She is co-founder and Chief Strategy Officer at Tagboard and founder of TVinteract (acquired by Tagboard in 2014). Tagboard is a social media display platform used by broadcasters, brands, and sporting teams worldwide. Jenni helps lead innovative projects with
SEE INSTRUCTOR'S CLASSES

Gathigi Gishuru is a musician, photographer, clothing designer, and business professional. He’s currently a fixture in the Seattle music scene; his heralded rap group The Physics have released several albums, toured the country, and played sold out shows in major markets such as Los Angeles, New York and Chicago. In addition to creating music, Gathigi is an accomplished photographer and has spent the past five years curating photography based-events and building the Rappers with Cameras brand with his partner George “Geo” Quibuyen of Blue Scholars. Consistently enamored by fashion, Gathigi recently launched, SELANY, a uni-sex clothing line inspired by travel. During the day, Gathigi helps save lives one grant at a time working at the Seattle Children’s Research institute helping to administer large-sale funding for medical research.
SEE INSTRUCTOR'S CLASSES

This was fantastic! My takeways were "Impact, Inspire, & Inform," 5, 3, 2 rule, don't compare your real life with the highlight reel of those on social, and mentorship is a two-way street. I loved the panelists! Such incredible people! It was really cool hearing their stories, and experiences. Thank you!

Everyone here was super passionate, transparent and real. I really enjoyed this class and enjoy seeing Chase interview awesome people.