Lesson 1 from: Product Packaging for Podcasts 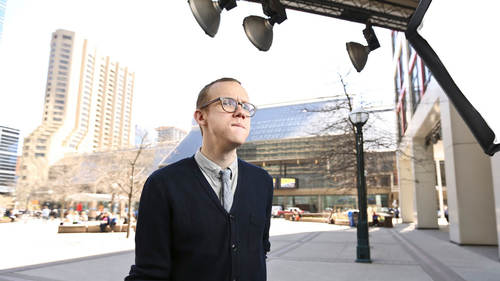 Lesson 1 from: Product Packaging for Podcasts

Just so I know, who in the room has a show? Just by show of hands. There's a handful of people. Who is thinking about starting a show? Okay collectively that is everybody. Who in the room is deeply obsessed with audio, the audio quality of the show that they are thinking, or the show that they already have? Thinking about the microphones, thinking about making sure that the mix sounds really great, thinking about how you can make a remote guest sound good; we have people who are obsessed with audio in the room? Yes? Okay good. Are there people in the room who are really interested in storytelling and the craft of making, you know, structurally sound, audio products? Yes? Okay. These are good things, I think that it is very important to make high quality audio, I think it is very important to have people who are obsessed with thinking about the structure of their storytelling, and innovating in new formats. I think making sure that you have a really, really good show is important, and h...

aving people who can push the medium forward, that is great. We are not gonna be talking about audio at all for the next little while, (audience laughs) we are gonna be talking about all of the things around your show, the non-audio assets, and I like to call this product packaging for your show, and there's a picture here of a supermarket shelf, and in a lot of ways the show that you make is a lot like one of these products on the shelf, right? And your job, beyond making a high quality piece of audio, is to make something that has a bunch of assets around it that are going to stand out, and are going to encourage people to sample, and then ideally listen, and subscribe. Just for those of you who are currently producing shows and you just shout this out, what are some of the things beyond the actual audio that you actually produce on a regular basis? What are some of those things, just shout'em out. (mumbles) Say it again. Content. Content, what else? (mumbles) Say it again? Blog posts. Blog posts, absolutely, what else? [Female Audience Member] Photos. Photos? Yeah, accompanying visual images? We're gonna talk about all of this stuff. And just to give you a heads up, we're gonna talk first about why this stuff matters, and then we're gonna dive into a bunch of different levels, and I like to think about shows at different levels. We're gonna talk about sot of your series or show-level elements, and the importance of those. We're gonna talk about the episode-level elements, the sort of pieces of content that you're gonna create around your audio each and every time you release a new episode. We're gonna talk about seasons and seasonality, and why that makes sense for some shows and not for others, and how you might package up a season, a collection of episodes. And then we're gonna talk about some of the really fundamental pieces of website design, and not just website design in general, but podcast specific website design. So we're gonna talk about all of the pieces of your show that don't have anything at all to do with audio, and if I can sum this up in a single slide, it is this; podcast listeners use their eyes first and their ears second. You can put an enormous amount of work into your show but whether you like it or not, human beings judge books by covers and they judge podcasts by their cover art, and many, many listeners are going to form an opinion about your show, long before they hear a single second of it. I wanna give you a quick example of this. I'm gonna show you cover art for two different shows. Has anybody heard either of these shows? (audience mumbles) Okay. For those of you who have not heard either The Black Tapes or Someone Knows Something, you just shout this out, what is the vibe they are going for here? (mumbles) It is dark. Blair Witch Project, what else? What else do you notice about these? [ Audience Member] A little Stranger Things. A little bit Stranger Things, something is going on? Yeah, there's a little bit of mystery. What are some of the elements that draw your eyes here? [Female Audience Member] The red. The red, absolutely, the little accent color on the mailbox in Someone Knows Something. There's also a red, I don't know if anybody recognizes this, this is the CBC logo, the national public broadcast are in Canada, some sort of corporate branding or a network branding on the upper right-hand corner of the Someone Knows Something show. There's also branding in the lower right-hand corner, it's a little more subtle on The Black Tapes. But before you ever hear a second of their show, you're probably going to see this somewhere whether it's on your computer, whether it is on your phone, whether it's in an ad, and I think you can look at the visual motifs these shows are using, and they have some things in common, and really get a sense of like the vibe that they're going. They are communicating an awful lot and I think based on this, you probably have some sense of what you're going to get into before you ever hit play. I think it is really, really interesting to show this to people who haven't heard it and say what do you think this show is about? Is this fiction? Is this non-fiction? One of these is fiction, the other is non-fiction, true crime right? Visually, how are they indicating that? So we're gonna do a deeper dive into podcast artwork and look at a couple more examples later on, but I think this is a really great example of how we tend to use our eyes first, and our ears second, particularly in podcasts. Now I know people use the word podcast to mean a lot of different things. It can be slightly confusing because people sometimes talk about podcasts to mean the entire series, sometimes people talk about a podcast as a single episode. For the purposes for our time together today, I just wanna cover some very, very basic definitions just so we're all on the same page. When I say show, I am talking about the entire podcast series, that is every episode, every season, that is the top level that we're talking about. Shows of course are made up of episodes and episodes are sometimes but not always grouped together into seasons, so it's a lot like television. For the purposes of today we're gonna be talking about shows, episodes, and seasons, so we're talking about you know, a T.V. show, a T.V. episode, or a season of a T.V. show; the same thing applies for a podcast. We're all on the same page, you're good? Yes? Cool, great.

Dan highlighted the items that we overlook over time and it was awesome to note these things. I will totally recommend this course. Thank you, Dan!