Lesson 6 from: Put Your Money to Work: Take Control of Your Business’ Finances 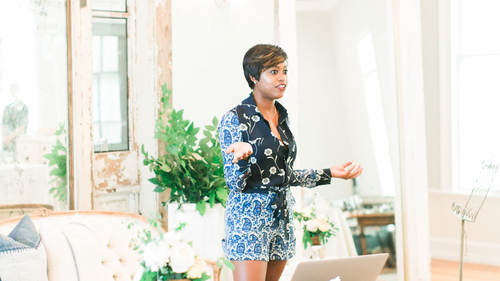 Lesson 6 from: Put Your Money to Work: Take Control of Your Business’ Finances

welcome. I'm Natalie. Frank. I am the co founder of the Rising Tide Society and head of community. Here it honey book. And I'm so excited and so honored to be sitting here today with three extraordinary women and moderating a panel. We're gonna be talking about all things entrepreneurship. So as we get started, I want to take a moment and allow each of these amazingly accomplished business owners to share a little bit more about themselves. So we'll start with you, Christina. Hi, everybody. I'm Christine Escalera. I am an attorney, and I am the only founder of the contract shop where we provided contract templates Teoh, Honey book and other entrepreneurs in different various creative disciplines. Hey there. My name is Ashley Carter. I'm a calligrapher and copywriter at Ashlan Nights, where I helped creative small business owners sell more with their words. Hello. My name is Dominic Broadway. I'm award winning financial planner, personal finance expert and the founder of Finances Demyst...

How to Run Your Business Like a Boss
Finance Resource Guide

The information is good but still very basic. Good tips from time to time but nothing you cannot find surfing in the web. Still I deem this to be a very good point of start for somebody trying to initiate a business in USA.

Thank you for the insight!