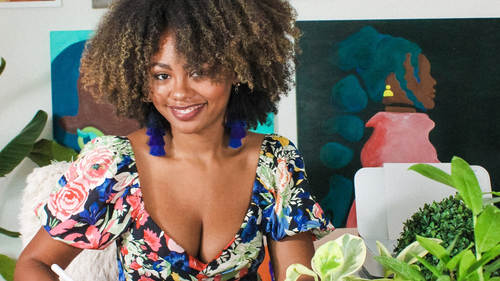 Hi and welcome back to created live TV mining. Is Kate on the host today? And I'm very excited to be bringing on rain on Noriega. She is a artist, illustrator, writer and educator. And today she's gonna We're gonna talk about her art at end her poetry a swell. Have her show us a little tutorial on illustrating on the IPad in procreate. And we're gonna talk through some of her amazing art. Um, and so I'm very excited to welcome Raina to the show today. Welcome. Right now. How are you? I'm good. K. Thank you for having me. I'm excited for our check. Yeah, I'm really excited, Toe. Have you? So, um, e discovered you on instagram a while back from your beautiful art. So why don't we talk a little bit about you as an artist, you know, from from the start at school. And, you know, it sounds like you went to, um, school art school, and you also studied, likes you, started out as a teacher, Sam Flint, and then have ventured into being a full time artist a little bit more about your background a...

Illustrator and author Reyna Noriega sits down with us to talk about her creative journey, how it feels to see more representation in creative communities and gives us an illustration demonstration on her iPad Pro. Using Apple’s Procreate, Reyna takes us from rough sketch to final piece, so you see how her work comes to life.

Reyna Noriega is an Afro Latina author, illustrator, and educator. For her, art has always been a tool by which she could dive deeper into herself. The joy and clarity it brings her have led her to devote her work to help others heal and find the happiness that is intrinsic. She lets her culture and experiences as a woman shine through in her work in the hopes others can see representation for their experiences and feel empowered.