The Real Cost of Your Dream Life 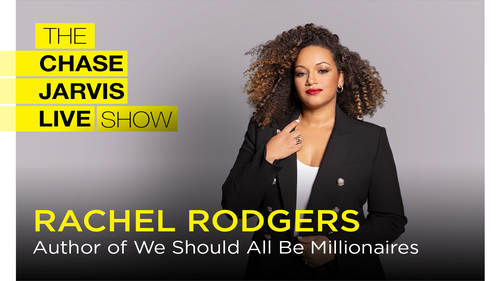 The Real Cost of Your Dream Life

Hey every day, What's up? It's Chase Welcomes an episode of the chase Jarvis live show here on Creative Live. This is the show where I sit down with amazing humans that I unpacked their brains with the goal of helping you live your dreams. Today's guest is Rachel Rodgers, she's a Ceo an attorney and a black woman, working mothers, self made millionaire, uh absolute brilliant, helping people at brilliant at helping people uncover the thing that's going to make them money. And in this conversation we sort of peel apart some of the myths that, hey look, money is not everything, it's true. Money is not everything, but money can help you create the living and the life of your dreams and being real about money is one of the things that defines Rachel Rogers. She's got a new book out. We talk about a new book, which is called Everybody should be a millionaire, We should all be millionaires. Rather a woman's guide to earning more building wealth and gaining economic power. Uh in this we share ...

Think of that ONE dream you’ve always imagined materializing. Are you getting closer to it every day? Or do you keep yourself from committing to it for fear of failure?

Bestselling author, coach, visionary, and guest for today’s episode, Rachel Rodgers, shares her story, and how she built her multi-million dollar business, Hello Seven, after becoming a lawyer, working for state and federal judges, non-profits, and even Hillary Clinton. Rachel has been featured in global publications including, TIME, Forbes, Entrepreneur, Fast Company, and The Washington Post.

A humble upbringing, practicality in thinking, and a strong numbers game helped Rachel sky-rocket her targets and create the life of her dreams. In this episode, we dig into Rachel’s bestselling book, We Should All Be Millionaires, and the most significant lessons learned along the journey.