The Urgent Need for Stoicism 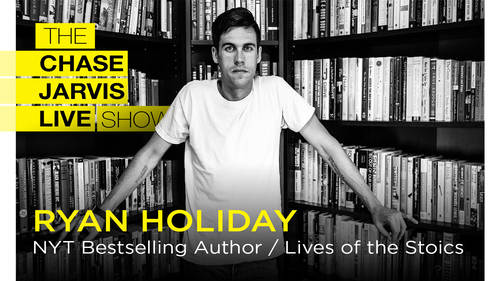 The Urgent Need for Stoicism

Hey, buddy, what's up? It's Chase. Welcome to another episode of the show. Today's guest is Ryan Holiday. You probably know Ryan. He's been on the show a couple times. In case you don't, you've been living under a rock because Ryan's work is so popular these days. Ryan Holliday dropped out of college at 19 to Apprentice under Robert Green, the author. He then was a marketer at American Apparel. He went on to found a creative agency and then started writing books on his own, where he has written, I think, 10 books, most of them bestsellers, including Obstacles Away Ego is the enemy. The daily stoic and stillness is the key, which has sold millions and millions of copies around the world. 30 languages. Something like that. I consider Ryan a dear friend, and today we're having him on the show to talk about how to live the life that you want on your terms by being incredibly practical. And the book in particular, is about the stomachs. It's called Lives of the Stoics, and right now you're ...

JAfter dropping out of college at 19 to apprentice under Robert Greene, author of The 48 Laws of Power, Ryan Holiday became the director of marketing at American apparel, one of the biggest fashion brands in the world. He then founded a creative agency and has written 10 books including bestsellers such as, The Obstacle is the Way, Ego is the Enemy, The Daily Stoic, and Stillness is the Key.

Today we’re talking about the practical side of living the life you want. Studying the lives of the stoics- learning HOW to think rather than WHAT to think, opens up incredible new areas of growth and opportunity. Ryan shares in depth about how, in his 20s, he laid the groundwork to achieve his current level of success and fulfillment. There’s so much to unpack in his story, including:

If you dig the episode, you’ll love Ryan’s new book, Lives of the Stoics.