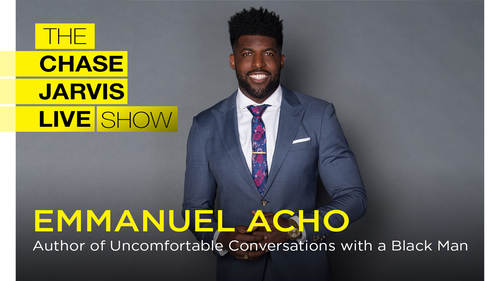 In the wake of George Floyd’s murder in 2020, Emmanuel Acho recognized that Black and White people simply do not understand each other in America and he wanted to use his voice to do something about it. So he launched a video series, Uncomfortable Conversations with a Black Man. His goal? Open a dialog on topics we’ve been afraid to talk about: racism, privilege, cultural appropriation, and more. That show exploded with over 70 millions views, widespread media coverage, and led to his must-read NYT best-selling book by the same name.

Emmanuel studied sports management and was drafted into the NFL while earning his masters in Sports Psychology in the off-season. Not long after retiring from the NFL, Emmanuel started his broadcasting career at ESPN where he was the youngest national football analyst, and named a 2018 Forbes Under 30 selection.

After earning his undergraduate degree in sports management in 2012, Emmanuel was drafted by the Cleveland Browns. He was then traded to the Philadelphia Eagles in 2013, where he spent the majority of his career. While in the NFL, Emmanuel spent off-seasons back on campus at the University of Texas, to earn his master&#8217;s degree in Sports Psychology.
SEE INSTRUCTOR'S CLASSES