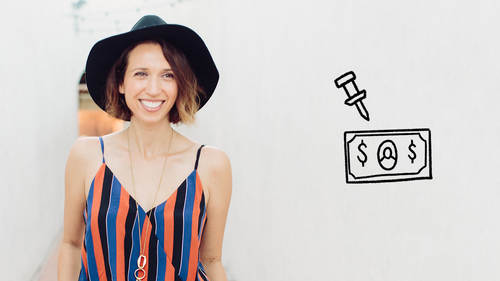 How to Create Your Ad

What is Pinterest? Pinterest is a visual discovery engine. People come here to find ideas, and they look for experiences. They see it in a visual way. So if I'm looking for a black dress, if I search little black dress on Google, I'm just gonna get a black dress with a white background, and I'm not gonna give an idea where to wear that dress. If I go on Pinterest, and I search LBD, oh my gosh, the inspiration that comes out of Pinterest is insane. I'm gonna see a New York lady wearing an awesome sleek sheath black dress, or I'm gonna see a black ball gown. I'm gonna see all these options, but I'm gonna see the women that wear it, and where they wear it. It takes your idea to the next level. Pinterest ultimately helps you discover and do what you love. Pinterest is a place that wants to better your life. It is a place that people come for future things too. Everything is a future intent. People come to actively consider what to do or buy next. So if you are a product or a service, they'...

If you’re one of the many businesses that have found the Pinterest platform conducive to promoting your brand, then you’ll definitely want to consider expanding your reach on the site with paid ads and promoted pins.

Pinterest has more than 200 million monthly active users, and more than a third of them have an annual household income of more than $100,000. Two-thirds of the content saved to Pinterest is from businesses, and 83 percent of Pinners said they’d rather follow their favorite store than their favorite celebrity.

“Pinterest Queen” and digital content creator Alexandra Evjen will show you how to take advantage of all that brand loyalty and enthusiasm with perfectly produced paid Pinterest ads. She’ll walk you through the specifics of developing a highly targeted and effective ad campaign that meets your business goals.

She never would have thought she would be dubbed the &#34;Pinterest queen&#34; by her peers or end up with a famous home published in top decor magazines and blogs, but it attests to the skills and talent that has made the name Alex Evjen synonymous with influencer marketing. Deemed <b>Business Insider</b> and <b>InStyle Magazine’s</b> Top Pinner, she has helped countless brands such as Target, Home Depot, and Anthropologie create digital content that keeps consumers wanting more and making products fly off the shelves.
SEE INSTRUCTOR'S CLASSES