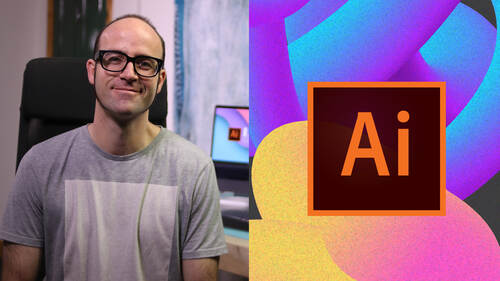 Getting Started with Your Adobe Illustrator Advanced Tutorial

How to Use the Color Guide in Adobe Illustrator

How to Make Long Shadows in Adobe Illustrator CC

How to Make Images Black & White in Illustrator & Mix with Color

How Do You Make Anaglyphic Text Using Adobe Illustrator CC

How to Create a Duotone Image Effect in Adobe Illustrator CC

How to Change The Default Font & Swatches in Adobe Illustrator CC

How to Proof Colors in Adobe Illustrator CC

How Best to Use Illustrator With Other Adobe CC Software

How to Use the Touch Type Tool in Adobe Illustrator CC

How to Multiply Strokes to a Path in Adobe Illustrator CC

How to Make the Paper Cut Effect in Adobe Illustrator CC

How to Distort Bend Shapes & Type in Adobe Illustrator CC

How to Make a 3D Ribbon in Adobe Illustrator CC

49. How to Make a Linocut Effect in Adobe Illustrator CC

How to Use the Puppet Warp Tool in Adobe Illustrator CC

How to Use Adobe Illustrator for Web & UI Design

How to Make an Animated GIF Using Adobe Illustrator CC

What Next After Your Illustrator Advanced Course

Alright, this video, we're going to learn the shortcuts for aligning and distributing. And the short answer is there's no default shortcuts and it's a little bit hard to make they're not under edit keyboard shortcuts, you can't make them that way either. Okay, we're gonna use something called the actions panel. So let's go. The cool thing about it is we're gonna learn how to make this kind of custom shortcut using actions um in illustrator for aligning and distributing, but you can use this for anything. Okay, So yeah, let's get started. So first up, if you just want to be super quick and you don't wanna actually learn this, you want to download my ones, you can do that. But let's get a window actions and I've got some default shortcuts made. Its for Mac only. Sorry, pc people, if you make a pc one, awesome, send it to me and I'll add it to the exercise files as well. So that would be super cool. So to load, the ones that I've made, go to this little burger menu here, go to load action...

s and there's one called align and distribute. Okay? And I've got some basics in there, we're gonna make vertical in a second but that will be there when you download it. And the shortcuts that I've got to remember. This is Mac only. I'm holding the command key down and the function key. So check out your keyboard, there's an F. N. Key. You need to hold down both of those and then we use the F keys along the top. Okay, so F One F two. F 34. So the basics if I select these two guys command function F one is left align command function. F two is right align F three. I'm just gonna ignore the command function. Okay? So if three is um center horizontally, if four is vertically and then we've got distribution. Okay. Now the reason distribution is a little bit different if I grab all these guys and its command function, I'm using F and F 11 for the up and down left and right. Okay, you can change yours, you can rename them horizontal and vertical up and down. Makes more sense to me than vertical, horizontal. You can go and change it by double clicking them. Okay? You know what you're going to run into when you're creating your own and like what I did is I wanted to use F5 for this one but if five opens up the voiceover thing which is really command function in five. My mech, ah that thing we've all turned on at some stage and not know how to turn it off. So yeah, you'll run into some when you're making your own, you'll run into some problems with pre existing function keys. Pcs are easier. They don't control so many of those F keys were missing center vertical. So to make it, what we're gonna do is we're gonna go to have have that selected. Let's get a new Okay, new action, decide where to put it. I've made my own folder, you can just stick it in the default actions, but I'm gonna stick mine here, decide what shortcut you're going to use. And in our case we're gonna use F four, I've tested it command function F four. Even though it doesn't say function on a Mac, you have to hold function even though they don't say it okay? But test them out to see if they'll yeah, you might have to come back and then change them because it might open voice over. Okay, this one here is gonna be called center, vertical, vertical. Often all cold up and down and left and right as well. I'm not sure why that baffles me so much anyway, so it's recording. Okay? It's going to record your action whatever you do next is going to be part of the shortcut and we're going to go align vertical, yep, that's it. Okay, vertical. And you can see it recorded, head stop. Okay? And hopefully now I should be able to select these guys and go command function F Four and it lines them up so that's how you create your own kind of custom shortcut. Start it make a new one, give it a name, give it a shortcut, which you'll have to probably test a few times. I know that if five doesn't work and there's a few other ones on a Mac that doesn't work. But yeah. And then just do stuff now, you can take this further and do things like rotate, it'll keep recording. So if I go to here and I hit record it'll move it will rotate and you can see it's recording everything. Okay? So now if I stop it and I go you, my friend, my shortcut command function, therefore, okay, it moved it up and rotated it. So you gotta, if you're doing something quite repetitive, you can record it, records everything. Okay? So I'm going to delete these guys here, UK and that's gonna be us. I'll save these in the exercise files and you can just use mine to do a P. C. One. I'd love you to do it. Um Yeah drop it to me, send me a message and I'll add it to the exercise files. Alright? I will see you in the next video.