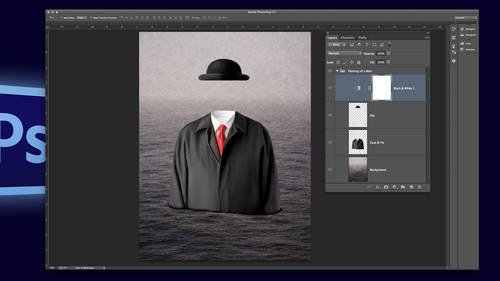 Welcome and my goal today is to cover like everything I know about layers and ninety minutes so it's a lot, but it's not, we'll go through it, it's all good this's an advanced course. I'm going to start off with a few basic things because the problem with labeling courses for me for, like, beginning, intermediate and advanced is you don't really know, like I have spent years and photoshopping they'll just be this one thing with this tool that I never looked at that until someone points it out, you have no idea. So in the beginning it might seem a little bit slow for for some of you advanced people, but I'm just gonna consider that my warm up period, so all right, so the first thing we're going to dio is I know people don't necessarily like this necessarily, but I think it's really good we're going to rearrange our panels, all right? Because here's the thing if you spend all day in photo shop and you go and you get a tool and then let's just open a new file here, right? So I have a tool...

Kost is AMAZING. This is incredibly worthwhile 90 minute investment. On top of all the cool PS insights she shares, I really appreciate her sense of humor. Kost is a delight, and also freaking brilliant.

This is an awesome class. Gaining a better understanding of why I need to do certain actions helps me gain the knowledge needed to move farther in my creativity. I was ready for a new level and you took me where I wanted to go. Thank You.

Julianne is a phenomenal instructor!!! I so appreciated her enthusiasm and joy in what she teaches, not to mention the wealth of knowledge she shared. Thanks so much for a fantastic class!!!