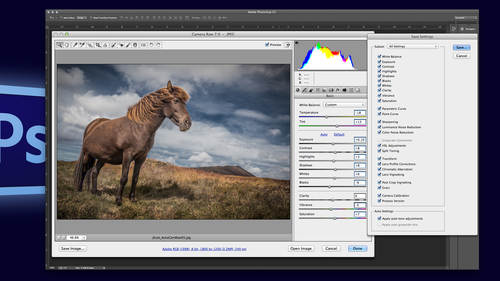 We're going to talk all about different ways that you can automate camera, so not in light room. We're doing this now, like the bridge to camera, rhonda photoshopped workflow, so there's a lot of different ways we can automate some of them are more subtle than others, but I want to make sure that I tried to get out as much information as possible because that's kind of my thing because I don't know everybody's a different like point in their learning curve, so I just try to get as much information out there as possible. So the first thing I want to mention is that there's a difference when you're in bridge and you open your raw files, you can either open them in photo shop where you can open them in bridge. And what do I mean by that? Well, adobe camera raw is a plug in, and it plugs into both bridge and photo shop, and so most of the time, it probably doesn't matter which you open them into, but there are a few times when it will so and there's a difference as well. So I've got this i...

Julieanne Kost is one of my favorite instructors. Great flow of information, good basic start and then she jumps into the meat right away. She adds many Photoshop tips, information on how the software works both in Photoshop, Bridge and Lightroom. This is good for me because I use all three. Kost is able to clearly explain the steps and technical elements beautifully. In short, lots of information, put clearly and with a smooth flow throughout. Great stuff, I highly recommend her courses.

As a matter of fact, she's one of my favourite PS tutors. She has this special balance between tone of voice and the ability to communicate. Julieanne is simply exceptional!