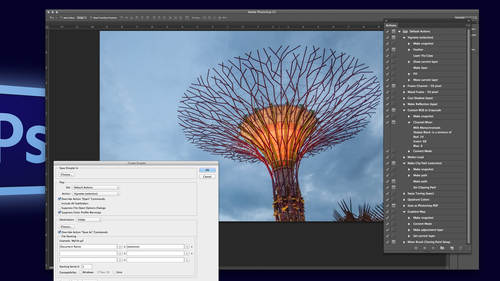 We are delighted to welcome back julianne cost because julian is the principal digital imaging evangelist for photo shop and light room at adobe systems and she's the founder of jake offs dot com she's a great friend of the creative life family I know you love her to welcome back julian cost way have a little bit of a complex topic for this last session this last ninety minutes but what I my goal is is that I want to make actions accessible for everyone like that's my goal because most people I think you know they'll say I've got like you know something to dio to fifty images but oh it's going to take me more time to figure out the action then do it maybe like the person second time but after you understand actions and like kind of can move along and take those trying training wheels off this will speed up your workflow completely in ways that probably are hard to imagine so before we get into actions there's just one thing I want to do and I just want to show you image processor so th...

If you want to stay ahead of the competition, you need to know how to use Adobe® Photoshop® to its fullest potential. In this seminar, you will discover how to maximize your productivity and avoid timely repetitive tasks using the powerful automation features in Adobe Photoshop including actions, batch processing, droplets variables and more!