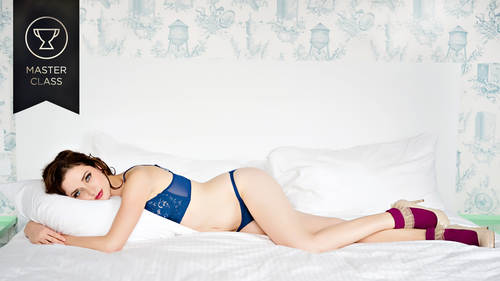 My guys, you're so far away hey, I'm very excited to be here thank you for having me. Um, I'm a little nervous about what I'm going to present to you today and not because I haven't but through it tremendously because I spent every waking moment of the past month working on this but it's a new concept asleep for me it is and maybe for you guys a little bit too. So I have a couple questions for you first, how many people here shooting boudoir or some version of working with women? Glamour? Ok, not that many how many people want tio? Okay, that's a better, better good answer okay, starting to get a little nervous um all right, great, so we're going to talk a little bit about boudoir business today we're going to a little bit of shooting today or any kind of mix everything up, please feel free to ask any questions because like I told you guys before this makes a ton of sense in my head. Hopefully it makes sense here too to start, I'm going to tell you just a little bit about me I'm not go...

Running a boudoir photography business can be a fun and enriching career path for any photographer - learn how to build one that complements your style and life.

In Building a Successful Boudoir Business with Jen Rozenbaum, students got an up-close and personal education on the way she runs her business. Now Jen is teaching you how to think, plan, dream, and strategize about starting your own. Jen will discuss how to think, plan and strategize your personal business plan. There is no one right way to structure a boudoir photography business and in this class Jen will help you develop a vision for the way you want to run one.

Join Jen and be inspired to create the boudoir business you’ve been dreaming about.

Jen Rozenbaum is authentic, real and heartfelt as always, encouraging you to learn from her past mistakes. I loved that the class was only around 3 hours long, it's perfect for busy people who can't seem to find the time to sit for a 3 day class. I'm really thinking hard about switching up my pricing, so this class came at a good time for me. Also lots of good reminders and ideas for shaping a business to work for ME and the things I need to consider to make sure I'm happy. FIVE STARS JEN!

Jen is amazing and an absolutely gifted photographer. In addition, she's willing to share her vast knowledge of the boudoir photography business, which can help any photographer avoid the pitfalls that may arise along the way. I recommend this course to anyone, whether they're a new or seasoned photographer. I'm grateful to Jen for her openness, humor and willingness to share information that added to my "toolbox."