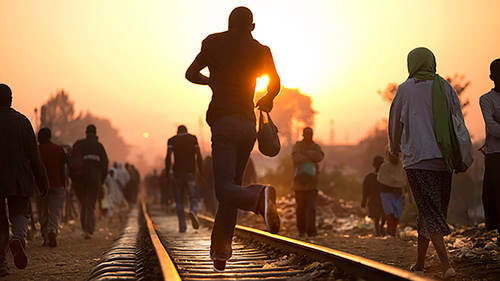 She is a Pulitzer Prize winner. Just amazing. Amazing body of work. And I have been waiting for a long time for you to be here on Creativelive. So I'll let you take it away. Great. Thanks, Kenna. Hello, everyone. I'm really excited to the hair and so great to meet all these people at Creativelive. This audience is wonderful. Everyone so enthusiastic. I love it. So I want to encourage you feel free with questions. At any point, I'm showing a lot of images and I mean a lot of these air kind of complex things. How do you build a story? How do you find a story? How do you get access? How do you turn a no into a Yes. And they're things that apply to all aspects of photography. Whether you are a photojournalist, whether you're a wedding photographer, really anything that you're doing, it's the same principle. So I'm feel free toe, bring on any questions you have because there's a lot to cover and I'll probably forget to say something. So, um so a little bit about me and how I came to photojo...

Deanne Fitzmaurice is a Pulitzer Prize winning documentary photographer and multimedia storyteller based in San Francisco, California. She is a regular contributor to Sports Illustrated and ESPN the Magazine, and has also been published in TIME, Newsweek, The Economist, Stern,
SEE INSTRUCTOR'S CLASSES

Great course. I love how candid Fitzmaurice was about the awkward parts of photojournalism and her techniques on access, which can be tricky. I have some limited experience as a photojournalist at smaller publications and it was inspiring to hear about her career and the stories behind great stories. More of a lecture than a lesson, but I picked up some helpful tips and feel inspired to go create some new work.

Another awesome course by Deanne. I really enjoy her enthusiasm and love for the art of Photojournalism. Her technique for build relationships and humanizing the topic of her photograph really makes me want to jump in and push myself. Clearly the uncomfortable feeling of pushing yourself pays off!

Good class. Great photos and stories. Not sure I got too much pragmatical info and process help that I was assuming I would get out of this class..