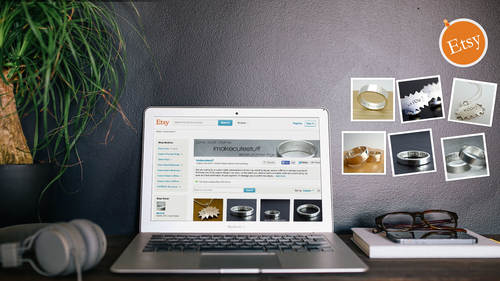 Business > Etsy 101: Launch Your Handmade Shop > Myths And Truths About Selling On Etsy

3. Myths and Truths About Selling on Etsy

Questions to Answer Before Opening an Etsy Shop

Get Ready to Set Up Shop

Set Up Your Etsy Profile

Set Up Your Etsy Listings Manager

How to Manage Your First Sale in Your Etsy Shop

All right. Ready Myths and truths. Not selling on Etsy. Alright. Starting an Etsy shop is easy. Yeah, totally true. Totally true. It's so easy. I mean, really, You don't even have to have everything that we're gonna cover in the class to open an Etsy shop. You know, we'll be pretty. You can start it easy. Easy. Running an Etsy shop is easy. Yeah. No, it is. It is probably one of the most challenging things you can dio. Not only are you making things, but you're putting them out in the world to sell. You're trying to figure out how to best present them and represent them online. And not only that, your job is never done. There is no finish to a Nazi shop unless unless you stop selling things right. But we're gonna keep going, uh, listing guarantees success. Yeah. Yeah, There's no guarantees in life, but you'd be surprised. There are There are a lot of beginning at sea sellers who will start their shop, and they'll come to me for consulting and they'll say, You know, I've had my shop ove...

Marlo Miyashiro is a jeweler by trade, crafter of sewn things, teacher of photography techniques at SmallObjectPhotography.com, and mentor / arts business consultant for emerging artists at CreativeArtsConsulting.com She has been in the retail and wholesale craft industries for over
SEE INSTRUCTOR'S CLASSES

This is an an amazing class. It is great for beginners as well as those who have had their shop up for while. There is something new to learn for everyone on Etsy. Marlo's powerpoints are concise and clear. I was so glad to also get the ebooks so I can go back and review the course while I make changes to my store. I am able to bookmark and work through all the changes. Thanks for this course, Marlo and CreativeLive.

Marlo's live presentation was terrific! I learned a lot and was motivated to buy her materials. Looking forward to reading her materials in greater depth. Much thanks!