Lesson 2 from: How to Crochet an Arcade Stitch Cardigan 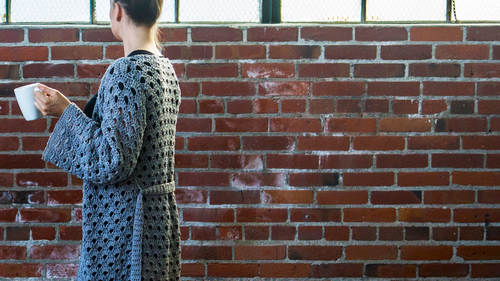 Lesson 2 from: How to Crochet an Arcade Stitch Cardigan

2. How to Use the Arcade Stitch Pattern

you're gonna start with your larger hook, the hook that I've recommended a seven millimeter. But this is one of those projects that you do need to take time to check your gauge. For if you were working on a scarf or a pillow or something, just flat be fine if you just if you just kind of winged it, but because you want this to fit you even though it's really drapey you want, you want to fit well, takes time. Crush a foreign swatch. Make sure that you're getting the same gauge because the thing is with Crow Shea is that gauge is highly subjective. You base your intention, kind of on how you grip the hook. Also very similar to how you shake someone's hand. If you're loosey goosey, you might be a loser. Co. Share. If you have a firm handshake, you might be a tighter crow Share. Also, your experience level may may denote that, so just go ahead. Take the time. It will take you like 10 minutes. Make us watch and make sure that you are get engaged. If you are not, go up or down one or two or ...