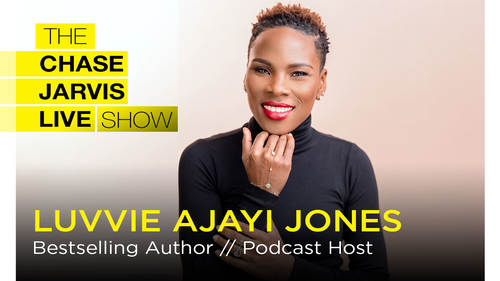 Creative Inspiration > How To Tackle Fear And Live Boldly

You already know there’s no free pass out of fear, but as today’s guest Luvvie Ajayi Jones says, the point is not to be fearless, but to know we are afraid and charge ahead regardless.

Luvvie is a New York Times bestselling author, podcast host and an incredible speaker. She sits at this amazing intersection of comedy, justice and what she calls, professional troublemaking.

She takes on dozens of stages every year around the globe and has spoken at some of the most innovative companies and conferences, including Google, Facebook, Amazon, Twitter, MAKERS, SXSW. She was selected to Oprah Winfrey’s inaugural Supersoul 100 list, voted as the Influencer of the Year at the Iris Awards and was chosen as a Black Innovator by XFINITY Comcast. Her work has been featured in outlets such as The New York Times, NPR, Forbes, Inc, Fortune, Essence, Chicago Tribune and more.

Today we explore her new book Professional Troublemaker: The Fear-Fighter Manual on how to not let fear talk us out of what we really want and need. Including: