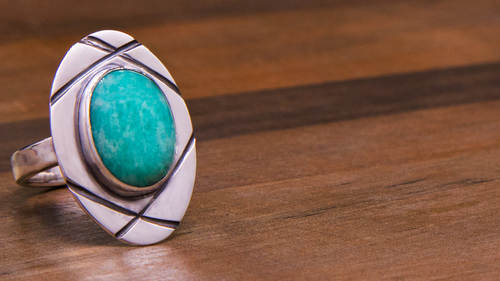 So our project here today we're going to do eh, basil setting or a kabash on setting onto a ring? So here is our peace we're actually going to also add a little texture tar metal here by doing a different technique than using let's say hand tools, eh? So we're going to be using something a little unconventional to create texture on term metal and there is talk about how to make a basic bantering so to start we're actually going to, um, start talk about sizing and talk about making our ring so when you are choosing what size of a ring that you're going to make, you need to first kind of reference the thickness of your medal now we're using rectangular wire here so it's kind of already cut two aa wit that we want um and then we are already and it's going to be cut to a link that we needed to be and so we're going to reference ah chart to kind of figure out what's the proper size so though it's so you don't know your size thank you here's our ring size er's can purchase the's now how ring...

Setting stones and bezeling can take your rings from simple to spectacular. Bonnie Heras guides you, step-by-step, through the ring making process in Intermediate Bezel Setting for Jewelry Making.

Bonnie spent years studying metal arts and jewelry design and in this intermediate-level class she’ll show you how to make a basic silver ring. You’ll learn:

There are many steps to forming a basic and beautiful ring, let expert instructor Bonnie Heras guide you through the process.

The content was good but could not see some of the techniques. Maybe use of the overhead camera positioned over the work space would have helped. Overall a good class.