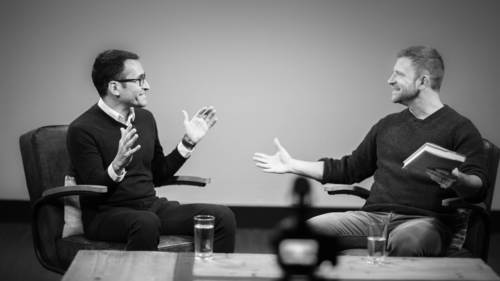 every day. What's up? It's Chase. Welcome to another episode of the Chase Jarvis live show here on Creativelive. You're familiar with this show? This is where I sit down with amazing humans and I do everything I can't unpacked their brains with the goal of helping you live those dreams of yours and career and hobby and in life. My guest today is an entrepreneur. He's a New York Times best selling author. And in this episode, we're gonna really focus on his new book called Back to Human. My guest is the inimitable Dan Schawbel. So happy Yes, We love you. We made a great palace way. We made it happen We've had a relationship on the Internet for, like years and years Time flies, time flies Um And we were just saying before the cameras started to roll how cool it is to meet someone in person that you spent a lot of time corresponding with on the Internet. And ironically, that's just the perfect Segway into the book. I don't have to go straight there, but the book about back to human, how m...

Dan Schawbel is a New York Times bestselling author, Partner and Research Director at Future Workplace, and the Founder of both Millennial Branding and WorkplaceTrends.com.&#160;
SEE INSTRUCTOR'S CLASSES