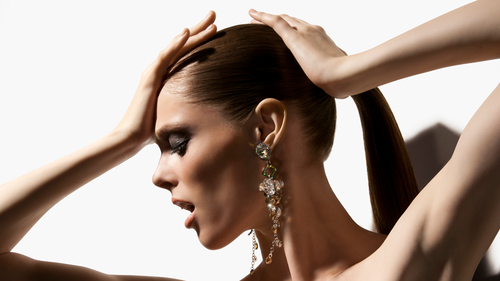 So, we're back at the CreativeLive studios to look through and edit our film from lighting the scene, which is all about telling a story, creating narrative, using the lighting as really a key element. Not just, of course, the storytelling of the models, but using the light. Now, we were at this Georgetown steam plant, which is amazing, a sort of 100-year-old factory that has a great story of its own. And, you know, you walk into an area like that, and you could immediately sort of feel the story that the plant has had, the people who have worked there, and you can imagine that the light coming through the windows. You can almost hear people and imagine people going up and down the stairs and working the machinery. So, there is a story, and my first reaction is, let's tell that story. It's a great story. And using the ambient light coming through the old window panes, casting a certain type of look and feel because of the dirt and grime that's on the window pane and the patina of the p...

Harness the story-telling power of light. In this class, watch fashion photographer Nigel Barker use light to tell two entirely different stories within the same space. Learn to evaluate a scene for potential lighting advantages and pitfalls. Train your eyes to spot existing natural reflectors already within a scene. Build your artificial lighting prowess with a behind-the-scenes look at lighting set-ups from a simple single light to a dramatic eight-light ensemble.

Learn how to use light to build a story and a mood into your photographs using both natural light and strobes. In this approximately 90-minute class, watch a start-to-finish shoot in an industrial steam plant. Keeping the setting, styling, clothing, and models the same, Nigel demonstrates how to use light to go from a World War II-era industrial story to a futuristic tale with a touch of sci-fi. The only thing that changes? The light.

While this class follows a photographer primarily known in the fashion industry, the lighting tips and tricks aren't limited to a single genre of photography. Whether you are tackling environmental portrait photography or a fine-art portrait, learn how to light the scene in this CreativeLive class.

As the photographer (and a judge) on America's Next Top Model for 18 seasons, Nigel Barker knows fashion photography. Besides his TV appearances (which also include hosting The Face and Top Photographer), the New York-based photographer also led films and documentaries for Hollywood clients. Respected in the world of fashion photography, Nigel has owned his own studio since 1996 and is the author of two fashion books. Students praise his engaging, to-the-point teaching style (and his British accent doesn't hurt either).

Nigel is a good communicator and excellent photographer. However, you won't learn too much from this class. It is a Behind The Scene footage showing Nigel at work. That's all. Nigel doesn't measure ambient and artificial light, and won't tell you the light values you need to achieve the desired effect. Recommend to those who look for motivational support; certainly do not recommend to those who look for technical knowledge. For that reason, I feel like the tutorial is a bit overpriced. Thank you

I prefer natural light, but want to learn more about studio light. Nigel is an excellent instructor, and photographer. He can explain lighting concepts in easy to understand steps. He also gives plenty of excellent and useful tips.

Simple class about storytelling a shoot. Nigel goes through the process and explains everything he does. Nigel is excellent at breaking everything down step by step. Another course by Nigel called "The Business of Photography" covers the same material but goes way more in depth. Personally didn't learn much from this course but was enjoyable to watch a professional work regardless.