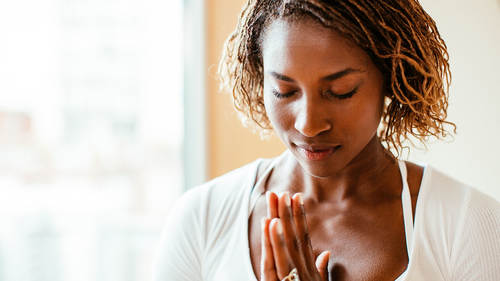 Hi, I'm Coyer Web and welcome to corn inversions. Today you're going to need some blocks. And if you have a wall, if you're a beginner and if you need a wall, you might use that in this practice. But we're gonna get upside down and get that core strong. Let's get started. All right, We're going to just jump right in and do one of my favorite core workouts, which is the ab Stretton. Place your feet on the ground and lie on your back. Place your hands behind your head and just crunch up. You're gonna inhale down and exhale as you crunch up, engaging the core, really pulling the belly button into the smile. You're going to do 25 repetitions here, just pulling all the way up, inhaling and exhaling. This is one of the best exercises, and it's always might go to because it really allows your back to stake glue to the ground. And when I have a back injury, it really helped me heal my back. So this is a really good way to strengthen every side of her abdominals without your back leaving the g...

Koya Webb is an internationally recognized health and wellness coach passionate about inspiring people to reach their goals through fitness and a healthy lifestyle.
SEE INSTRUCTOR'S CLASSES

As someone who is an absolute beginner to Yoga I really appreciate Koya showing all the ways the poses can be modified. Thanks CL for this!