Lesson 6 from: Pinstitute for SMG 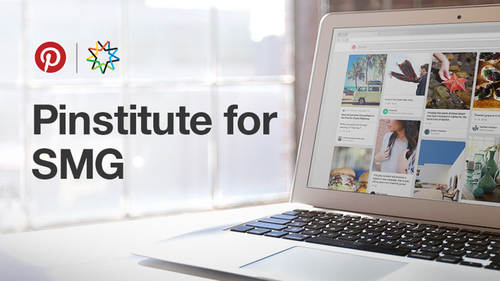 Lesson 6 from: Pinstitute for SMG

The art of the Pin

Hi, I'm jenny and I'll be sharing a promoted pens overview. Pinterest is about your future it's, the on ly platform with a forward facing vision it's a place where people are coming not to look at things in the past or read about the present, but a place for them to personally explore things that they want to do or want to buy. Why promoted pins? Because your audiences on pinterest and in the following section will review just how powerful promoted pins are promoted pins looked and feel just like regular pins on lee. They're seen by more people through targeted placement. Promoted pins are different than other types of digital media buys, mostly because they are a natural part of the painter experience and performed justus well if not better than the organic pens that surround it. They amplify reach to relevant audiences, showing up in the same place as the organic content. Not only are brands welcome, but they're essential promoted pins contained the content that is useful and helpful...

for penner's engagement has been super strong weather, organic or promoted engagement has been really high, especially on mobile promoted pin see engagement rates of two to five percent, which generally is above the industry standards. This leads to what we tend to see, which is a thirty percent increase or total impressions coming from earned during a given campaign and even after a campaign ends, we generally see a five percent lift of to earn depressions that come later. So now that we've shown you how promoted pins can help you reach your goals, let's walk through the actual mechanics. Pinterest is one of the few platforms that gives you that gives you and your brand the opportunity to own that and and consumer experience. You're promoted. Pins show up in the best location based on your objectives, allowing for easy discover ability. You know you're seeing a promoted pen by the label that called out promoted pins at the bottom. When you actually click on the promote a pen, you see it in close up video on dh. This captures that panama attention because it appears full screen, both in mobile and on desktop, a viewer that can then engage with your brands content by re pinning it. Clicking off site like sends comments. Pens are this visual bookmark, and each promoted pen leads to a destination of your choosing. By enabling this control, you're able to drive that penner experience both on and off interests.

Pinterest is a visual bookmarking tool that helps people discover things in a simple, visual way. Pinners might find something they love while browsing your boards, scrolling through a category you’re listed in or searching for you directly. Your business
SEE INSTRUCTOR'S CLASSES