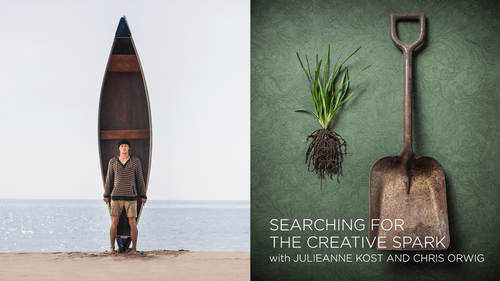 What we're gonna do is talk about creativity, as you mentioned, we're going to show some slides, just a sort of references and some images and then really try to dig in these different topics, and I'm going to kind of lead the conversation a little bit just we have somewhere to go when talking to start off with julianne, tell us a little bit about who you are and also what you do and how that relates to this topic. Creativity ok, so my name's julien cost and I actually worked for adobe systems. I've worked for adobe since nineteen, ninety two, always with a photo shop team, a phenomenal team to work within the light room team I before that, I went to school for and I, you know, I have to tell you I'm super nervous, and the reason that I'm super nervous is because my mom and dad might be watching e I just had to get out there, so if you are high, I love you so s o I went to school for psychology, I wanted to be a sports therapist, but I also love photography and my parents had a dark ro...

The creative spark is a powerful force, yet it doesn’t always come easily. Join Julieanne Kost and Chris Orwig as they give insights from their own lives about how to go ignite and sustain the creative spark.

You’ll explore ways to get started and to keep from getting discouraged when you encounter resistance during the early stage of the creative process. You’ll learn how to keep the momentum of a project going and how to engage technology to take your work and imagination to new heights. You’ll expand your creative potential by embracing gratitude and refreshing your stores of tenacity, fight, and hope. By the end of this course, you’ll be equipped with habits, strategies and best practices for making better and more creative work.

Long read. If you don't like to read here's the short take: Highly recommended. Applicable to all. As a hobbyist and amateur photographer, I have know both Ms Kost and Mr Orwig through Lynda.com and Adobe TV for their excellent classes and teaching skills. They are easily experts in their respective areas and well known on a national and international level as to merit the descriptor as "famous". So when I was offered this course through Creative Live, I signed up for it with lowish expectations (even though I like both presenters). Who hasn't heard such talks about creativity from such venues as TED Talks, B&H Photo, Adorama and a plethora of youtube videos? Yeah, great...what's next? As I was watching this talk, I became spell-bound with Ms Kost and Mr Orwig who spoke from their hearts about this elusive and rare skill of being creative. Their discussion hit on photography but went far beyond the lens. They invited the listener to listen to their own hearts about pursing their creative passion(s) plus gave PRACTICAL and do-able advice! (No, you can't get creative just by listening or attending a workshop. You have to WORK at it and make TIME for it.) It was also refreshing to see some of Ms Kost's darker composites and know that it's ok to 'go there'. The other gift these generous humans beings gave me was showing how they listened and encouraged each other to keep talking about this creative spark. They were not trying to out-do each other with chest thumping stories or images. Rather they were opening up in a way that is rarely seen in a venue like this (or really, life in general). I would recommend this talk to be heard by all. Have it broadcast in schools and beyond (yes, I think it is THAT profound). Kudos to Ms Kost, Mr Orwig and Creative Live for this most excellent presentation! Thank you, thank you, thank you.

Great conversation and creative boost. They both touched on a lot of topics I fight with every day. I lack creativity but I enjoy beautiful creativity. When I see Julieanne's images I always ask "how did she do that"? I am encouraged and I have strong points to work with. I am a big fan of Julieanne. I've watched many of her instructional videos. Thanks for the class.

Quick and pleasant little discussion around creativity. Reminded me of the importance of sticking to my creative aspiration no matter what. Love the note about making sure to balance content consumption VS creation of content. Overall inspiring free class.