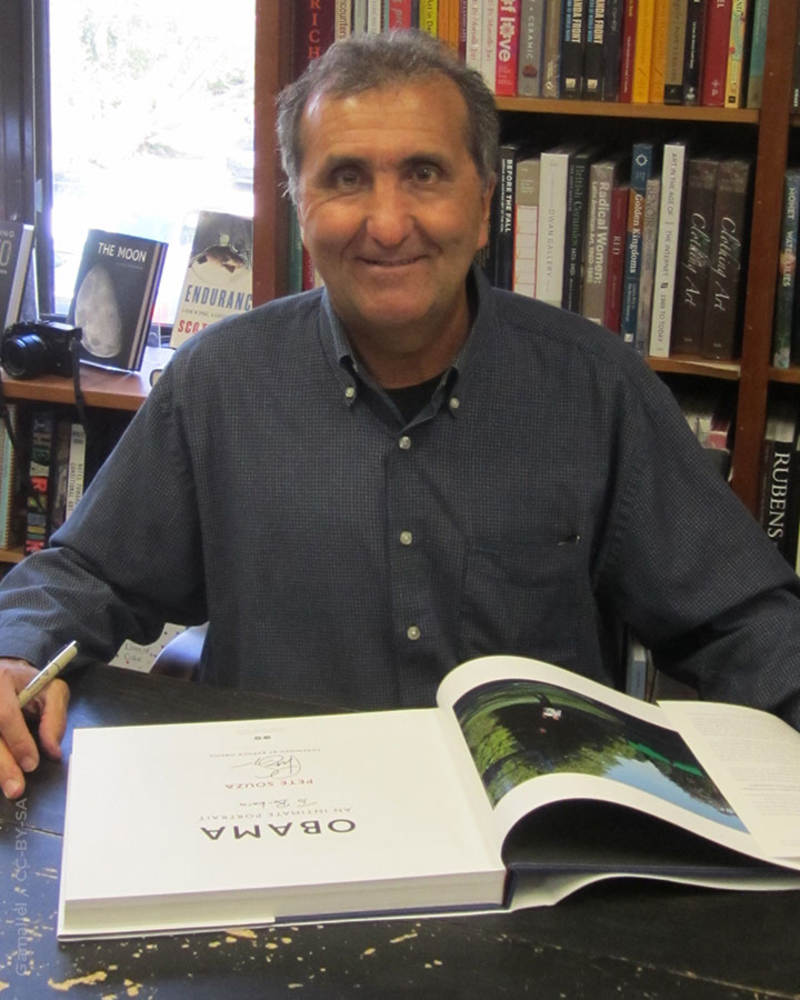 Pete Souza is a best-selling author, speaker and freelance photographer based in Madison, Wisconsin. He is also Professor Emeritus of Visual Communication at Ohio University. Souza was the Chief Official White House Photographer for President Obama and the Director of the White House photo office.

His book, "Obama: An Intimate Portrait," was published by Little, Brown & Company in 2017, and debuted at #1 on the New York Times bestseller list. It is one of the best-selling photography books of all time.

His latest book, "Shade: A Tale of Two Presidents," also debuted at #1 on the New York Times bestseller list in October 2018. Shade is a portrait in Presidential contrasts, telling the tale of the Obama and Trump administrations through a series of visual juxtapositions. Here, more than one hundred of Souza's unforgettable images of President Obama deliver new power and meaning when framed by the tweets, news headlines, and quotes that defined the first 500 days of the Trump White House.

Previously Souza worked as an Assistant Professor of Photojournalism at Ohio University, the national photographer for the Chicago Tribune based in their Washington bureau, a freelancer for National Geographic and other publications, and Official White House Photographer for President Reagan.

His book, "The Rise of Barack Obama," was published in July 2008 and includes exclusive photographs of the Senator Obama's rise to power. The book was also on the New York Times bestseller list.

In addition to the national political scene, Souza has covered stories around the world. After 9/11, he was among the first journalists to cover the fall of Kabul, Afghanistan, after crossing the Hindu Kush mountains by horseback in three feet of snow.

Also while at the Tribune, Souza was part of the staff awarded the Pulitzer Prize in 2001 for explanatory reporting on the airline industry.

As a freelancer, Souza photographed two stories on assignment for National Geographic Magazine and three photo essays for Life Magazine. His photographs have also been published in many other magazines and newspapers around the world including on the covers of Life, Fortune, Newsweek, and U.S. News & World Report.

In 1992, Souza produced and published "Unguarded Moments: Behind-the-Scenes Photographs of President Reagan," a coffee-table book based on his 5 1/2 years in the White House.  Former Sen. Howard Baker Jr. said in his introduction to the book that Souza recorded "some of the most intimate, honest and humanizing scenes of the presidency I've ever seen." A updated book, "Images of Greatness: An Intimate Look at the Presidency of Ronald Reagan," was published in June 2004 by Triumph Books.   Souza was also the official photographer for the June 2004 funeral of President Reagan.

In 1996, Souza published a documentary photography book entitled, "Plebe Summer at the U.S. Naval Academy".  The book chronicles one company of incoming midshipmen through the six-week indoctrination period of Plebe Summer.

Souza has won numerous photojournalism awards including several times in the prestigious Pictures of the Year annual competition, the NPPA's Best of Photojournalism, and the White House News Photographers Association's yearly contest.

Souza has had solo exhibits of his photographs at the Leica Gallery in NYC; Stephen Kasher Gallery in NYC; The Kennedys Museum in Berlin, Germany; Etruscan Museum in Cortona, Italy; Kansas State University in Manhattan, Kansas; Fermilab in Illinois; U.S. Naval Academy in Annapolis, Maryland; Navy Museum in Washington, D.C.; University of North Carolina in Chapel Hill, N.C.; Boston University; Ohio University in Athens, Ohio; and the National Press Club in Washington, D.C. His photographs have also been part of group exhibits at the National Archives, Smithsonian Museum of American History, Corcoran Gallery of Art, the Newseum,  and the 92nd Street Y in NYC. His traveling exhibit, "Two Presidents: Obama and Reagan," debuts in early February 2019.