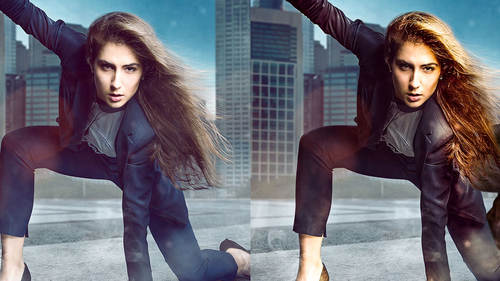 Welcome everybody, I am totally thrilled to be here in front of you doing this particular class, and you're gonna learn some things here that are a bit different to some of the other things you've learned. I'm going to be using something called camera raw filter fairly extensively, and to me, it's the most revolutionary thing since the layers were introduced into Photoshop many, many, many years ago. So, we're going to start off with the first one, which is going to be a scary paperback novel and what we're going to do, I'll show you the beginning and the end of this one. Okay, so if I come along here, we're going to end up with something like this. Something nice and dark and spooky with a bit of a title on it, like so. And a cat, because it's got to have a cat on it if it's me doing it. So we'll be doing that one, without, you'll notice, tons and tons of layers in here. We'll also be looking at this file, which has got some really nice hidden surprises in it. There'll be some things ...

in there that are really, really, really gonna surprise you, I promise. Okay, so we'll be doing that one and we'll also be working through this project here, which is adding some motion to this car, which actually, by default, does not have any, it's static, and it's orange, not red. So you can see that just there. So we're changing all of those things out as we go.