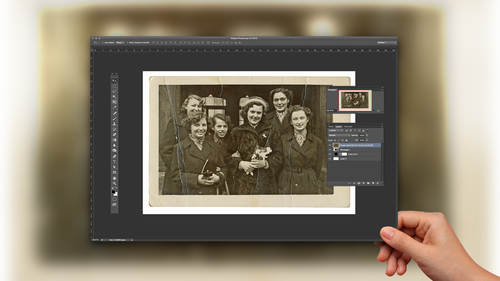 We got a bunch of really cool images here for reducing and simplifying our background. All right, so we are going to remove all of the people from this image. And it's not gonna take a long time at all. We're gonna wind up with a really beautiful image of a beach, and it's ... You guys are gonna see. It's using really incredibly simple techniques. And we're gonna show you how to add back some of the sand texture so it actually looks like there's clear, blank sand where these people were in the image. Okay. So the first thing we're gonna do here is, I wanna make an accurate selection around my subject, because we're gonna be using big brush tools to get rid of all these people. So I wanna make an accurate selection around my subject, around this area here. There we go, just like that. And once I have that selection, then I'm able to use big, broad tools. Now, the reason I wanna use large tools is because the sand that's underneath these people, we do have changes in color. You can see, ...

Join Photoshop instructor Aaron Nace for an in-depth lesson into cloning and image correction. Learn how to remove distractions, simplify backgrounds, and hide skin blemishes using advanced cloning techniques. When do you use the clone stamp over the healing brush tool? Learn the differences between the two and how to use both to their fullest potential. From retouching to image restoration, these cloning techniques will make a series difference in your workflow.

Very helpful and useful tips. I am not of the belief that Aaron isn't the best speaker. I find that he is down to earth and doesn't come across as arrogant despite the fact he is truly a master at photoshop techniques. I follow his youtube posts and always learn a new tip or technique. In fact I purchased this class based on Aaron Nace being the presenter. This is the first Creative live I've ever purchased. I've watched several of the the free ones but never felt the need to purchase them. I am extremely happy with my purchase and can't wait to try out some of the new tricks I've learned. Thanks

Great course - easy to follow and I appreciated the brevity. I particularly liked Aaron's style of explaining things in layman' terms and was surprised at how simple using the pen tool seems to be. I will also try to embrace the brush tool, which had always looked too "fake" to me. Now that I know how to add texture, I might have to give it another chance. Off to practice some of these techniques.

Aaron is a master of photography and I was so honored to be able to see him work his magic in person. His methods and techniques are easy enough for any photographer whether they be beginners or more advanced. Aaron Nace is really one of the best Photoshop teachers out there!