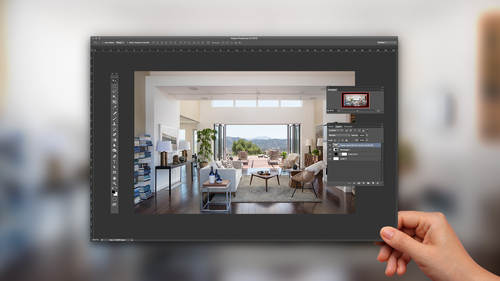 Overview of Tools for Architecture in Photoshop

My next step, I wanna say is, I don't know, feels kinda sterile. I think we can go at our people right now, rather than trying to clone stuff out. What do you guys think? It's pretty empty . Let's add some life to it and some scale, shall we? So, I'm gonna jump back into Lightroom, and I'm gonna go through, and instead of using Lightroom in my multiple exposures to blend, highlight, and shadow, I'm gonna use multiple exposures to blend different subjects into the photo. So, I'm gonna add people the same way I added highlight and shadow. So, while I was on location, there's me kinda directing, we've got this doctor, and I say, "I want you to walk like you have a purpose. "Like you're on your way to surgery or something." We wanna make this feel like we just put the camera in there for a quick second, and we captured a scene, a moment in time, in this hospital. So, I had this guy walk back and forth a few times, and eventually I found one where I think he looks like-- Like I said, he's t...

First, note to CreativeLive: Please include experience levels (beginner, intermediate, advanced). I think the bad reviews were because people expected a more advanced class than this. That, and that some people expect mind-blowing revelations in merely 70+/- minutes. This class was jammed pack with great information. I was looking for this exact information so it was perfect for me. Plus, Mike Kelley's teaching style is easy to understand. Any class taught by MK is worth watching, he always has useful insight and nifty shortcuts.

not only is Mike Kelley a genius, he is the Bob Ross of architectural photography. It's got a real "Lets just add some happy cars here and some happy people there" kind of a vibe. What a killer tutorial. Thanks Creative Live and Mike Kelley.

I really enjoyed the video as I do with all Mike Kelley videos. The different way to use the clone stamp as well a lot of little trick he did were great to hear. However, I completely agree with Nicholas, it would have been nice to see the image that they showed on the cover, as that is a scene that I'm far more likely to encounter.