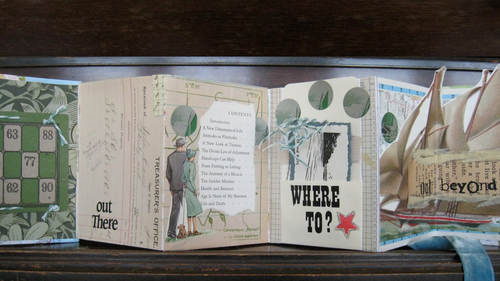 How to Theme A Concertina Book

Before we even talk about the actual collage of the book, I want to tell you a little little of hint that you want to do when you're creating something like this oftentimes you get going and all your materials air out things are all facing a different way and you end up believe it or not forgetting which is the top half of your book which is the bottom which is the front and which is the back so a good idea just the very beginning is to market you can mark it on the page is that you're using because it will eventually all be covered up anyway I like to draw a little arrow to show myself as I go collage ing that this is the top and then here where it's going to be glued into your covers? I give myself a note that this is the front of the book, so if I get really excited and I'm collage in each page and I go and collage the back as well it would be a kn error for me to collage this because in the end when we attach our covers, you won't see this so you want to make a little mark on the f...

Molly Meng, an artist, teacher, and storyteller as well as designer and owner of the greeting card business, 8mm Ideas.
SEE INSTRUCTOR'S CLASSES

I really loved this course. So many creative ideas that sparked my imagination. Molly's instructions are really clear, and I loved that things didn't need to be perfect to work well. I applied what I learned immediately to make a concertina book for a friend's 50th birthday. I'll definitely be doing more of these. A great way to make gifts or use for your own memorabilia.

This was a really fun class. I’ve made a few concertina books in the past, but I’ve never added other elements like pop-ups and inserted tabs. I got lots of ideas for new things to try, and a really good demonstration of the basics. I especially appreciated the discussion of all the alternatives - things like different kinds of adhesives, and when you might use each one.

thank you thank you! i have sooo many greeting cards that i can't bear to throw away...now i don't have to! great ideas and easy to follow.