Politics and Disillusionment in Iraq 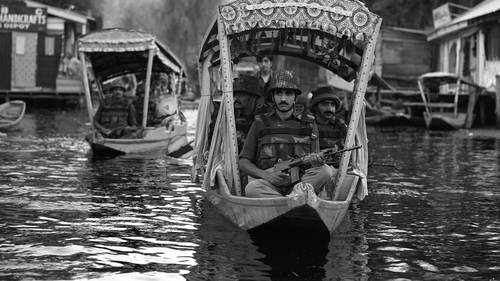 Politics and Disillusionment in Iraq

So here we're going into Iraq. Politics and disillusionment. Is there anything else other than disillusionment with politics? These are some personal photographs of me and some of my mates that I invaded Iraq with. You can just see a little bit of the kind of life that we that we had there. So two years after founded seven, I found myself in Q A preparing for another war on. Do you know, I discussed with Newsweek how to do this and very little, actually, I kind of just said this is what I'd like to do. I'd like to do what I did in Kosovo and kind of follow the troops in and work around the civilians. And today, you know, after 15 years of war, it's hard to understand that documenting a war like two days before the war started Newsweek This FedEx package arrives from you in Kuwait, and it's a digital camera with one battery, 1 512 megabytes flash card on a satellite phone and no instructions on by. I had never used any of this equipment ever Onda message from Newsweek saying Hey, we don...

't want you to do what you're doing we want you to photograph the troops, photograph what's happening and deliver your pictures several times a week so we can use them with everybody else's pictures. Which, frankly, you know, was a really good idea for them. It kind of threw me, but actually it was a smart thing to do. And I was a fool for not really engaging with Newsweek beforehand in this conversation, on anticipating this request and changing the way that I was gonna work. But I ended up with his really complex Canon Digital camera. Never used before on a very cheap 2400 and 35 zoom lens. I never use zoom lenses, so I was really thrown on, ended up going into this war, you know, totally, really lost. Actually, it was it was horrible. But, you know, I get into the war, I end up driving through the desert on I end up coming across the United States Marine Corps on this incredible colonel who who when confronted with me and a few of my colleagues who had driven into them we weren't embedded. We were just random journalist driving through the desert on day called up his general who said, Get rid of them. Get those guys out of send them back. And he said, Well, you know, if I do that, Colonel, they will be in harm's way. And that's against the Marine Corps code of conduct. Right? So the general, whatever up to you on your head, be it. So we ended up inside this unit, and they ended up being, I think, the most aggressive unit in the invasion these were the guys who pulled down the statue in the square created a lot of mayhem. Many, many Marines were killed in this unit, and they killed many civilians. They found no evidence of weapons of mass destruction. Of course, on Daz, we came into Baghdad. The colonel, who you see here of the regiment, told me that, you know, they had no plan once, too. Damn Waas defeated on Baghdad, was captured there. Wa sno plan. Right? So we reported what we saw. We reported what we heard and we, you know, expected it to be represented in the media that we were working for you at face value. But it wasn't on the US media. I think of the time dutifully followed where the White House took them where state took them on. It wasn't until a year after the invasion, when Seymour Harsh published the ABA grade story in The New Yorker that the US media really got attacked together. Meanwhile, in Iraq, you know large numbers of civilians were being murdered, Body count off, Marines started to increase. And I think you know that Iraq was really one of the low points in media history on while I was fully aware always that the world wasn't quite how it was portrayed in the media, you know, I felt that this was really a step too far, and it marked really the beginning of the end for me, of my relationship with with the Press Azan active photographer. And this work is you saw. Here's all shot over she two or three days. It's one battle that these Marines were engaged in, and it was, you know, some of the most celebrated work by other people that I've ever produced. But I felt that it counted really for little. In the end, it didn't change anyone's point of view of this war. It didn't make the slightest bit of difference to the Marines or to, you know, the civilians. I think his powerful as it is, but I think I could have done a better job on. I feel that even though I tried hard not to do this in some way, this this work sort of glamorizes really what war is in some way, it feels to me like I'm watching a movie when I look at these pictures. So in the months that followed the invasion, I returned to Iraq for Newsweek on a number of occasions, and on each occasion the security situation would worsen. On our response was to rat surround ourselves really in a fortress, traveling in armored vehicles with highly trained former special forces soldiers driving the car guy I was with once had a bag of hand grenades. It is feet, you know, two assault rifles on his lap and these guys determined where we would go when we would travel so that we would survive three experience. And for me, this was really the tail wagging the dog, and I felt, you know, increasingly isolated from the story on unable to tell it, really, as I thought it needed to be told from the perspective boat of the civilians on to some extent from the soldiers on the civilians we generally represented in pictures like this. So I felt much less in control than I had at any time since Kosovo. I knew and had a privilege career, incredible opportunities, very grateful for that, what with many brilliant people. But I knew that, you know, I could not continue to work anymore. And compounding the frustration I had with my professional concerns was the beginning of an awareness that the level of violence that I was experiencing was very harmful to me and was very alienating on also unsustainable. So, you know, I really needed to challenge the rhythm of my life, and I needed to do it with some urgency.