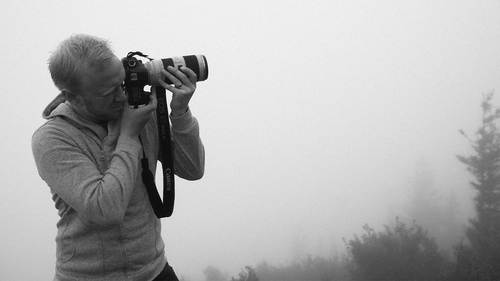 Hey, guys, My name's Casey. Welcome to Creative lives. Creative photography challenge for today's challenge. I'm bringing you double exposure if you don't know what a double exposure looks like. It looks like this. And what it is is to images combined into one. Now, there are three components that make up a good double exposure image. One is the subject to his background and three is supposed processing to put those two images together. We need a camera lens, a subject and a background. It's really bright out here. So we're gonna shoot this at an I S O of 100 with a shutter speed. Probably 25/100 of a second. And for an aperture. I'm gonna go at 2.2. Now, for our first image, we are going to use a subject that that's going to be a person that's gonna be Justin over here Now, the way that I want Justin to be live for this is with shadow in front. The background is going to be blown out as I possibly can get it cool. It's just nice blown out sky. Let's move on to image number two. I'm he...

re on the roof a little higher than we were before and were able to see the entire city. Now I'm gonna go ahead and take this picture. I'm looking for tall buildings. I'm looking for something that stands out and we'll really be able to fill in the neckline as well as the head of Justin. That's perfect thing. We got the image that we want to work with. Let's bring it back to photo shop. Okay, so we're back, and I brought my images into light room, which is where I start all of my editing process or a right click say Edit in and in Adobe Photo Shop CC. We'll bring out both of my images in both of the image of Jephson as well as the image of the cityscape. Go ahead and I'll move back to the image of Justin now, using my quick selection tool. I'm just gonna make a quick selection of, ah, Justin actually going to do it of the sky around him. Here we go, because I started selecting with this guy. Invert my selection by hitting command shift I. And there we go. Now that is selected. I'll goto edit, and when I click define brush preset, and what that does is it actually takes Justin's face and creates a brush from it itself. So now that I've got that image of Justin, I can actually move over to my cityscape. I hadn't create a new layer. Unlock the background and move this layer below the cityscape. Take the fill tool, and I'm gonna go ahead and paint that background completely white. Select the cityscape. A layer mask. Now when you go to layer mask, you have to open properties, and this is sort of the trick. Click invert, and it will turn your image completely white. But that's what we want. So now that I'll select my brush tool that will bring up the selection of Justin's face, go ahead and click once. It's a legacy, Justin. And that's the Skype, unlike the cityscape and a layer mask so that I can move the cityscape around without moving the layer mask itself. And what this does is this allows me to get other parts of the image into frame where actually want him to be. We're not done with the cityscape yet. I'm gonna select edit, move down to transform pick, scale and this will let me make this image much bigger, out a little bit bigger. Make those buildings really stand out. So gonna go to edit transform one more time we're actually gonna rotated counterclockwise. And what it's gonna do is gonna look like the buildings are kind of popping out of dresses. Face was soon back in so we can see kind of coming out of Justin's face. But I think this is where I want to end up. Here we go. That's pretty cool. Now, here's sort of the final trick. We're gonna go ahead and crop in this little cropping even farther so that the top of his head in the bottom of his neck are just a little cut off. There we go. Now I'm gonna go ahead and move back to the layer mask, select a different brush tool than face paint the rest of this image of the back, take away the saturation cause I like black and white images. And I would also add a curves layer to really just pump up that contrast. Not from here. You could just save it again. And once it's done saving, it will actually move itself back into light room so that you you can view it there. There's a lot of different ways to do this. And if you'd like a more in depth explanation, check out Aaron Aces, creating double exposures in photo shop on creative life To go out there, take some photos and share them on instagram with the hashtag creative photo, check out creativelive dot com CPC to get more challenges delivered directly to your inbox.

These challenges are so much fun and its fantastic learning new skills and practicing in general. I would love to see this be an ongoing thing. :)

The Art of Wildlife Photography