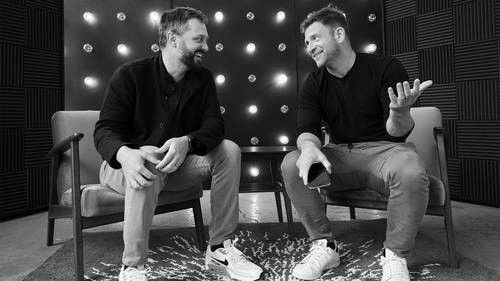 Today on the show we have one of my favorite comedians, Nate Bargatze. If you’re not aware of Nate’s work, consider this intro a gift – he’s on a rocket ship right now, one of the top up-and-coming comics in the game. After listening to our conversation here, you’ll want to check out his brand new Netflix special that just dropped. He’s laugh-out-loud funny and simultaneously has great insight around following dreams and creating success rather than hoping it “happens."

In our conversation we talk about his early life – how he found and decided to pursue his passion in the face of challenging odds (how many people become a standup comedian?), his earliest experiences of storytelling, and what it was like to have a father who is a magician and a clown. (It’s hilarious.)

In this episode we cover a LOT...

Nate Bargatze is an American comedian and actor from Old Hickory, Tennessee. He's known for his special on Comedy Central Presents, has appeared multiple times on Late Night with Conan O'Brien and on The Tonight Show Starring Jimmy Fallon. In 2019, Bargatze released an hour-long Netflix special titled "The Tennessee Kid."

Nate Bargatze is an American comedian and actor from Old Hickory, Tennessee. He's known for his special on Comedy Central Presents, has appeared multiple times on Late Night with Conan O'Brien and on The Tonight Show Starring Jimmy Fallon.
SEE INSTRUCTOR'S CLASSES