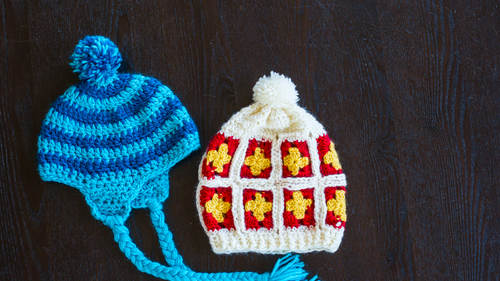 How to Crochet the Crown

all right. I'm really excited about this project. We're gonna be making a granny square hat super slouchy and fun. And the cool thing about it is the construction is a little bit unexpected. We're gonna be making a ton of granny squares, which I'm gonna walk you through, which will then turn into a band which will then so together to make a round the round body of the hat. And then from there we will create the bottom and the crown and finish off our hat with a little different kind of pom pom that we did with the last hat so super fun. And I feel like we should just dive right in. All right, so we're going to start by making one of these granny squares for this particular project we need to make 14 and this is gonna create the entire body of the hat. So let's make one now, So we're going to start with color, be which I've chosen to be this yellow and we're going Teoh start by chaining for they were going to join the round with a slip stitch in the very first chain. So now it's a littl...