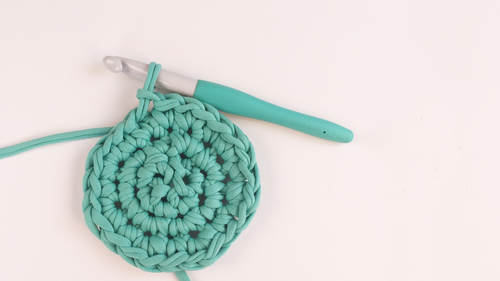 Now we're ready to move on, Teoh A little bit of finishing work. We're gonna talk about seeming pieces together. So what you need at home is just have a couple of swatches. It doesn't matter what size they are. In fact, just go into your swatch, Sachin. Just pull out from the pile. It doesn't really matter what steps they're done in. Although it would change it a little bit. I'm gonna give you just that. The general method that I used to peace two pieces together. So I've got my two swatches here. These were done in. I think I did these in half. Double crush A. And I'm gonna use a contrast in color on Lee because it will be easier for you to see on camera. You would, obviously, unless you wanted that to be a design feature, you'd obviously use the same color as your pace. So you need a large I tapestry needle. Um, in studio we've got we've got these laid out for you from clover and they've got the bent tip. I just really like that. It's not crucial, but I find that every little bit hel...