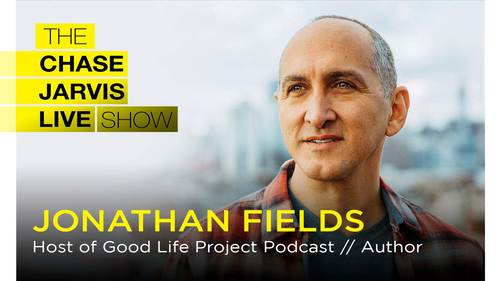 Hey, what's up? It's Chase. Welcome to another episode of the Chase Jarvis live show here on Creative Live. This is where I sit down with amazing humans and I do everything I can to unpack their brain with the goal of helping you live your dreams. My guest today is the one and only the inimitable Mr Jonathan Fields. Now, Jonathan, I've been friends for a long time and just just less than three years ago we got together in new york and he told me about a project he was working on that could identify the underlying characteristics of what fires people up. What helps them understand why this work pumps them up. This work drains them and I have since been along for the ride as he's developed this program uh it's called The spark A Type and it is also now a book. This if you have ever wanted to plug in and understand a little bit more about yourself to be able to think about the careers the past, the kind of work the underlying values that you have and where you might want to apply them thi...

The ongoing pandemic is creating a time of rapid transition. It’s as if we’re waking up from a deep slumber, and as we do so, we’re re-examining every aspect of life– especially our livelihoods and the work we do in the world.

If you’re someone who’s dug up the internet to find ways to rediscover your impulse, you would’ve infallibly come across Jonathan Fields and his work with unique imprints or Sparketypes®️. Jonathan is an award-winning author, producer, business innovator, and host of one of the world’s top podcasts, Good Life Project. He’s the chief architect and driving force behind Sparketypes, also the world’s first purpose, engagement, and flow archetypes.

In addition to writing award-winning and bestselling books like his upcoming, Sparked: Discover Your Unique Imprint for Work that Makes You Come Alive, How to Live a Good Life, and Uncertainty: Turning Fear and Doubt Into Fuel For Brilliance, Jonathan has founded several companies with a focus on maximizing human potential.

In today’s episode, Jonathan joins me to unfold the 10 different Sparketypes we all come under, the significance of our Primary, Shadow and Anti-Sparketypes, and how these help you get attuned to doing what makes you feel alive. Jonathan also talks about his transformative journey leaving his six-figure job as a lawyer to pursue his dream, and about his achievements and insights out of the Good Life Project.

Highlights from our conversation: