Escalate and Evolve: A Blueprint for Career and Life 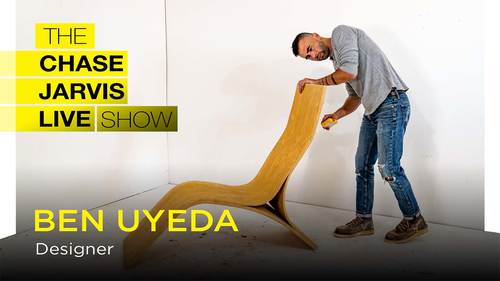 Escalate and Evolve: A Blueprint for Career and Life

Hey everybody, what's up? It's Chase welcomed another episode of the chase Jarvis live show. This is where I sit down with amazing humans and I do everything I can to unpack their brains with the goal of helping you live your dreams in career, hobby in life. My guest today is youtube and design sensation Ben you a to now, I'm going to go on the record right now and saying this is one of my favourite five episodes of all time, Specifically because of the wisdom that Ben shares in the next call, it, 50 minutes of this podcast. Now that's a big statement, but a little background on Ben. He stepped away from an award winning architecture from that he co founded, he left a teaching position at an ivy league school to create his own personal brand and small media company focused on making design and designs for everyday things for that, that you and I would love to make them affordable and accessible. Uh millions of people use his designs have paid attention to his Youtube channel which is j...

Ben Uyeda stepped away from the award-winning architecture firm he co-founded, as well as an Ivy League teaching position, to develop media companies that deliver affordable designs to the masses.

In the last four years, Ben’s design ideas have reached more than 50 million people and the free designs he gives away are being built on six different continents. Despite the populist and affordable nature of his work, Ben’s designs have been featured in an exhibition and workshop at the Vitra Furniture Museum in Germany. He shares many of his designs on his popular youtube channel, the Modern Maker, as well as his growing collaborations with brands to explore sustainable designs. This episode ranks as one of my my top 5 ever conversation. Why? Ben’s articulation of the creative process, including:

If you’ve either struggled with your hyphenated creative identity or simply need a boost of inspiration, this episode is going to bring you a ton of value.