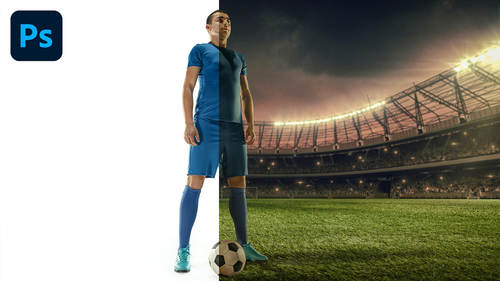 Learn to use Photoshop adjustment layers and layers styles to apply atmospheric perspective and create depth in composites.
Show Transcript

Examples of Perspective in Compositing

Matching Brightness in a Composite

Matching Saturation in a Composite

Matching Ambient Color in a Composite

Bringing It All Together - Compositing Project

in this video, we're going to talk about atmospheric perspective, and with this principle you will be able to create the illusion of depth in a composite. Let me first open up this group and make sure I have this blank layer selected, and I'm going to paint with bread so that you can see what I'm doing. So what is atmospheric perspective again? This is a principle that it's used a lot by people who are traditional artists painters, for example. And the principal, basically is that when you're trying to create the illusion of depth or three D space in a painting or image or in this case, a composite is that an object that is close to you will have mawr contrast, so it will be darker and brighter than a similar object further away into the distance. So you'll notice how the contrast on this fear is not as dramatic as the one in front. Also, the further an object recedes into the background, the mawr of the atmospheric color it will take. In this case, it starts taking a little bit of blu...

This course teaches what you need to know about creating composites. As alway Jesus delivers in a clear, precise and fun way. You can just tell this guy has a great personality and he loves what he does. I greatly enjoyed the course and would strongly recommend it. A big thumbs up!!!

One of the best courses I've done on CreativeLive and that's a high bar! An incredible mix of in depth guidance but also some simple photoshop tips along the way, I had so many 'wow' moments, learning things I had no idea you could do in Photoshop. Really a good pace too. Quite a short course but so many good lessons to revisit. Great work!

I think this is a wonderful course. It goes into the key aspects that one needs to know to make a good composite. Jesus does not go into needles details and assumes a basic knowledge of photoshop; this make the course very manageable as far a its length. Highly recommended!