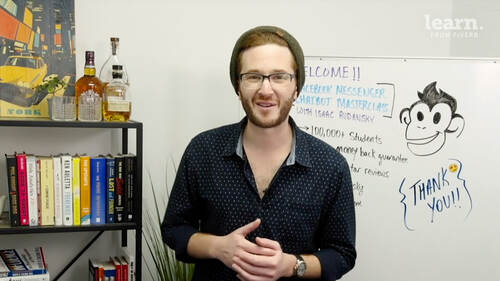 What is Messenger Marketing

How is Chatbot Marketing Different Than Other Marketing Channels

Who Can Use Messenger Bots to Their Advantage

Using Chatbots to Stay in Touch With Your Customers

Ideas for Incentive Structures to Promote Through Facebook Chatbots

Commitment and Consistency in Chatbot Design

Using Scarcity to Drive Your Customers to Convert Faster

What is Mobile Monkey

Chapter 5: Learning All About the Mobile Monkey Chatbot Builder

Understanding Q&A and What They're Used For

All About the Text Widget

All About the Image Widget

All About the Form Widget

All About the Quick Question Widget

All About the GIF Widget

All About the Attachment Widget

All About the Attribute Widget

All About the Connection Widget

All About the Email Widget

All About the Gallery Widget

All About the Navigate Widget

All About the Typing Widget

All About the Video Widget

Chapter 6: How to Wield the Mobile Monkey Chat Blaster Like a Jedi Master

Testing Our Chat Blast Before Blasting

Why Are Lead Magnets Important

Installing Your Chat Widget on a WordPress Site

Installing Your Chat Widget on a Shopify Site

Link to Messenger and Adding It to Emails and Blogs

Adding the Checkbox Plugin to Your Web Forms

Creating and Naming All Our Pages in Mobile Monkey

Setting Up Mobile Monkey Q&A and Other Loose Ends

Chapter 9: Understanding Audiences in Mobile Monkey and Using Them to Your Advantage

What Are Audiences in Mobile Monkey

Creating an All Contacts and Gender Based Audience

Timezone and Last Active Based Audiences in Mobile Monkey

Creating an Audience Based on a Custom Variable

Building and Reviewing Our Drip Pages in Mobile Monkey (10.3)

What Are Connections and When Would You Use Them

Creating a Connection to Google Sheets (12.2)

Creating a Connection to Gotowebinar

Forms - What They Are and How to Use Them

What You Need to Know About Staying Compliant With Facebook (14.1)

Getting Approved for Subscription Messaging (14.2)

Chapter 15: Conclusion ... Goodbye for Now but Stay in Touch!

Thank You, Getting Help, Final Thoughts

Howdy chatbots fans and welcome back in this lecture, I want to briefly talk about the difference between chat blasts and drip campaigns because on the surface they might look very similar. So we have blasts and we have drips. Okay, now we haven't spoken about drip campaigns yet or we haven't seen drip campaigns inside the mobile monkey interface yet. But there's a big difference in how you want to think about what messages and what content you want to put through a drip and the type of messages and content you want to put through a blast. So the primary difference is that a drip campaign is a sequence of messages spaced out over time. So in a drip campaign and this is after a person joins a certain list. So it could be all contacts, anybody who engages with your messenger body or anybody who messages your company through facebook will then get added as a contact list and then be put into a drip campaign. So a drip campaign, it's not as much about selling as it is about blast as it is ...

about blast because you're gonna, have you know, let's say 10 minutes and then another one that's gonna come out 30 minutes an hour, two hours, five hours, You know, and then maybe a day, one a day later. Now, what's important understand about the drip campaign is that you can send us many marketing messages within a 24 hour period of a person engaging with your bottom messaging your brand and then one more, 24 hours later, one more non promotional message. Um, 24 plus hours later, it's the 24 plus one rule, we'll talk about that more when we build drip campaigns, but the purpose of the drip campaign is engagement. Okay, I'm not sure if that's legible, but engagement, you want people to engage with the bot, you want to ask them questions. Like do you like cookies? They say yes and you know, obviously something a little bit more relevant to your brand because every single time they engage with your bot and they message you back through facebook, they stay on your list. So in essence, the purpose of drip campaigns is to give useful information, so about give useful information about your brand, but to also keep them on your audience. It's sort of like uh cookie expiration dates when it comes to re marketing campaigns and ad words right? There's only a certain, there's a membership duration to an audience. And the same thing is true with, with facebook bots, drip campaigns are a great way to keep people engaged by not being two uh sales e not trying to sell too much or not trying to promote the brand too much, but just more like engaging content. Like um blog posts, you might have a drip for a webinar. These are good, these are very common use cases for drips. Um white papers, e books, reviews. You know, industry guides, store hours. You know, these are sort of like evergreen types of pieces of content that are engaging and it's not asking the user to do anything in particular blasts are very different in nature blaster when you want to run a promotion, you want to get traffic to your site quickly, you want to get sales. So you have an urgency, right blasts are one off, one off hail Marys sort of um, and you want to get that to be as effective as possible. Like you're not so worried about losing subscribers in a blast, you're not as worried about frustrating subscribers. I mean you're always worried. I don't want to say that I don't want to give off the impression that we're never not worried about frustrating our users, but with blast, it's okay to be a little bit more aggressive. So we're gonna be aggressive are like tactfully aggressive and we're going to be urgent. Remember when we spoke about the principles of urgency with scarcity? Um, we're gonna use persuasive techniques more thoughtfully here, like with drips. Okay, here's like a, here's an interesting blog post or here's a case study. Here's a poll or survey. Here's a webinar registration sort of more straightforward. Again, getting engagement blasts are like, no, we need to sell, we put on our salesmanship hats. Um, and we're gonna see these actions in play as we designed these blasts. So that's the real primary difference and in both in both of these types of marketing, you need to always let your users know that they can unsubscribe. That's the best practice that Larry has found um that I found that when you're running either blast or drips in the first message, you could just say um you could write in square brackets, reply stop and um to unsubscribe, it's always a good idea to do that. And mobile monkey actually comes by default with that built in that if somebody reply, stop or unsubscribed, they get an option to unsubscribe and that helps the user experience tremendously in both trips and blasts. But that's the basic difference psychologically the differences, urgency, urgency, immediacy, aggressiveness selling. That's blasts, drips are more we want you to engage, want to keep you on our audience list. We want to promote content that we have, we want to keep our brand in the front of your mind. Um and hopefully that will result in sales. Of course, that's the whole point. But the primary purpose of the trip again is getting that engagement the primary purpose of a blast is getting that sale, getting that traffic to your website. Um, and accomplishing a very specific marketing goal. And we're going to think about these marketing goals as we talk about building our blasts and building our, our our rough drafts of our blast, which is coming up in the next lecture. So thanks so much for sticking around and I'll see you guys in a few seconds