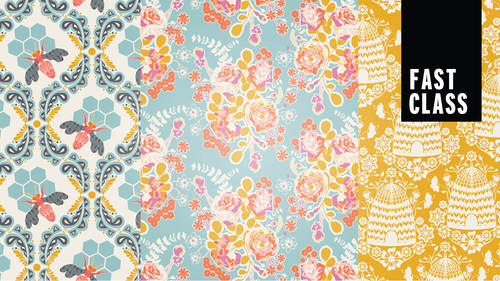 How to Design Repeating Patterns

Now we'll talk about groups and isolation mode. So again, this is some artwork that I have previously made I brought in just to show you some examples but don't let the artwork overwhelm you tomorrow, all day long, we're going to be making artwork, you'll know exactly how I did all this, but I just needed something to show you some examples of some more tools that we'll be using. So, we already covered groups a little bit, but these two documents really look the same, but they are constructed very differently. So I wanna discuss a little bit how important it is to group certain objects as you work and how to keep them on the layers panel and really establish proper workflow to how you illustrate. So this document on the right, I have nothing grouped. So all these little bits are independent of each other. These are independent, these are independent that makes it incredibly difficult to say, I wanted to rotate this bird a little bit. I showed you the lasso tool earlier but if I come in...

Bonnie Christine is a surface pattern design and author of Going Home to Roost - the blog dedicated to everything handmade and anything homegrown. She loves to cook and garden and is mother hen of the Roost Tribe, an inspirational
SEE INSTRUCTOR'S CLASSES