Lesson 5 from: FAST CLASS: The Power of Body Language 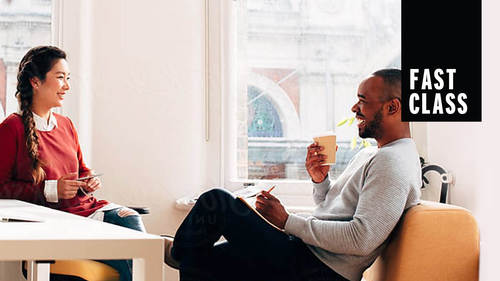 Lesson 5 from: FAST CLASS: The Power of Body Language

Okay let's do surprise. So this is the next micro expression on your micro expression chart. Um In the first column you can see the picture in the second column. I want you to write exactly what happens on the face with surprise. And the third column what to do with the micro expression we're gonna talk about in a little bit. So surprise. Also the eyebrows and the eyelids lift so they go up the face and the mouth drops down. So it looks like this. The difference here. People always confuse fear and surprise. The easiest way to tell the difference is in fear. The eyebrows are flat across the forehead and in surprise there upside down U's. So watch the difference. This is fear. Where is this a surprise? Right immediately. You can see the difference in the eyebrows. This is a huge distinction if you are a parent and you ask your kid. So did you know about the big party last night And you see fear? It's a very very different expression than if you see surprise. So that is why surprises. So...

important. It's a distinguish. Er in honesty, we're doing lie detection. This is a big one. I'm gonna have you look out for when you ask someone, do you know about blank, they should so surprise honest people didn't know. Whereas fear is an indicator that there's something else that's happening there, disgust. So disgust is when we feel revulsion at something. It's when we crinkle our nose. So we lift our nose up. We see these wrinkles in the upper area of our nose and the upper teeth show. So it looks like this. Uh, it's that face you make when you smell something disgusting, that is the face of disgust. Now, a lot of people ask me, especially in business, why do I need to know discussed unless you're a chef? You know, why is discussed? Important. Here's why discussed is often shown on people's faces when you're asking them about preferences. So any time you ask someone, what do you think about or do you like? People will often show disgust when they're pretending they like something. So you've seen this all the time if you ask someone. So what do you think of the new guy? Oh yeah, he's great, right. And they're actually making that discussed face with their true preference and that nose crinkling very rarely appears in other facial expressions. So when someone says that to you, especially when they're thinking, it usually means they're trying to think of a better way to say it. So if you ask someone, so what do you think of the of the work we did. They go into that kind of like, uh and they're trying to figure it out there, trying to figure out a way to say nicely what they actually think. So, watch out for that discuss with clients And that's when you want to say, you know, really be honest with me. I want this to work for you. I want to talk about what works for you. So that's a way to get on the same side. More rapport building behavior can help take down their anxiety about telling you the truth um sadness already. This is the last micro expression. So the reason why I say this for last is because it is the hardest micro expression to fake. It's incredibly difficult to access these muscles. In fact when you take the picture I really need you to tap into something that you're genuinely sad about because it's very hard to engage those muscles. Here's what you're gonna do, you're gonna pull your eyebrows down, you're gonna pinch them together into this little pinch line and then you're gonna pull the corners of your mouth down into a frown so it looks like this right? Even makes you sad watching me do it. People's eyes often water when they make this expression really genuinely so perfect memory, that's perfect. What are you thinking of? It's so sad. I was just doing the facial part good, you're good. Oh and you act actually a lot I have a lot of actor clients who take because they need to be able to access those emotions very very quickly on their face so it's perfect. So think of something that's really sad, pull your eyebrows down, let's see yep Mag that's good, pull those eyebrows together and down so you're laughing. It's so hard to make them genuinely, this is why I save it for last, sadness is the hardest micro expression to fake. And if you can't find that facial expression, it's totally okay. You can use one of mine. It is that hard. Um You know people always say, oh I have an ugly cry. It's because we rarely make that facial expression that genuine sadness, Those muscles aren't activating like that very much. It took me months to be able to look in the mirror and pull those I rose together and into a frown. Yes. It's a very weird thing to do. Luckily I have no shame about making my face into weird into weird shapes. Um So are we okay on sadness? And that frowny faces just like an emoticon emoticons actually aren't that wrong in this? That frown is actually what we make when we feel sad. I think the emoticon for anger is also the browse like that. Which is kind of funny because that is what our eyebrows do when we're feeling angry. All right. So I have a little tip for you here, let's say that you're in a meeting and your client is making a face that you do not recognize. They're doing something and you're like, I don't remember this. I don't remember all seven of the micro expressions or what are they doing? What you can do is you can actually mimic the facial expression and tap into what you feel. I do this all the time and I do this with friends and family as well. If they are showing an expression on their face that I don't quite get, it doesn't fit into the seven maybe, I didn't remember, I will make it and then tap into, oh I'm feeling aggravated. Oh I'm I'm really like this person is really like getting geared up for something. Our bodies do work that remember the facial feedback hypothesis. Facial feedback hypothesis says that not only do our emotions make us have facial expressions, but our facial expressions also cause us to have emotions. So because of empathy, when we mirror someone, we also begin to feel it. So that can also work during a client session is if you're really not getting what they're saying to you, you can try doing that and that can help you tap into what they're talking about what they're feeling.