Finding Self When No One Is Looking 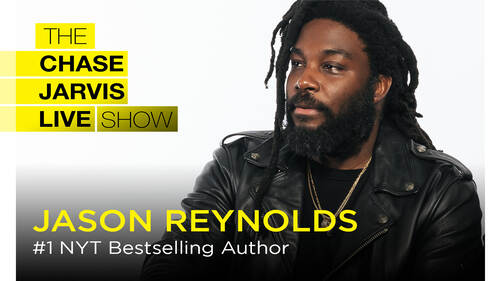 Creative Inspiration > Finding Self When No One Is Looking

Finding Self When No One Is Looking

Finding Self When No One Is Looking with Jason Reynolds

Learning to Think Critically on the Fly

Critical thinking is a skill that is greatly admired and often associated with people of intelligence. It is an ability that requires the confidence not to blindly accept everything at face value and to process and challenge information with a mind that is free to agree or disagree with what it is taking in. But how do we learn to think critically, especially in the heat of the moment? Jason had a very unique and uncommon upbringing that shaped his thought processes from an early age, one that really got me thinking about how I and most people I know have been raised. While Jason’s childhood was quite different from the norm, he was careful to state that it was still always rooted in respect between a mother and a son, and their roles were never compromised. However, the principles of what Jason learned from his mother can be applied and learned at any stage in life in learning to be a critical thinker, so here they are:

Most children are raised in an environment where talking back to their parents is seen as a lack of respect for authority. However, in Jason’s home talking back was not only tolerated, it was encouraged. Jason says that being encouraged to talk back gave him the freedom to express himself and his feelings, regardless of what he had done or what wrongs had been committed. It also made him always feel like a person of equal value when it came to discussions of any kind.

Giving people, especially children, a voice at the table gives them the freedom to be curious and ask questions, to express their understanding and most importantly to feel heard. Whether you’re a parent raising kids or have long ago grown up and are now learning to understand your own voice and thoughts, learning to speak up in a conversation and to give others room to speak is the first step in learning to think critically on the fly.

2) Find the freedom to agree or disagree

The fear of disappointing people or being rejected can often lead people to stay quiet with their own opinions and to accept whatever is being told to them. Often in a parent-child relationship, the child isn’t even given the option to disagree with what is being said, they are to just “do as they’re told”. Jason’s mother never forced him to accept her answers as the only truth, and this was a crucial piece in his development of the skills to think for himself and come up with his own answers. When we find the freedom to be able to agree or disagree with anything we take in, we begin to find our voice and the confidence to believe in ourselves.

3) Have confidence when you argue your point

One of the key elements to any argument or debate is confidence. If a person doesn’t have confidence in the point they are bringing across, the chances of anyone else having confidence in it is slim. The skill of speaking with confidence takes time and practice to master, but it can start from as early of an age as the environment will allow. Jason’s mother always told him that if he was going to argue his point to do it with confidence and strength, and so he did. And with practice, he became great at it, even when the outcome still wasn’t always what he had hoped it would be. But in the process, he learned how to think quickly and critically and how to process his own emotions and what was going on in his mind.

Whether we were fortunate enough to get to practice these skills as Jason did as a child, learning to speak up, finding the freedom to agree or disagree and having confidence when we argue our points are some of the foundational tools that will help us to think critically in any given moment. Sometimes though, personal conditions (such as anxiety) can seem to get in the way of finding confidence.

Anxiety as a Superpower

Anxiety is another hot topic in today’s society, being at an all-time high in almost every age demographic. And most often anxiety is spoken about with a negative connotation as an unfortunate condition or disability. Truthfully it can be debilitating for some, and a life-long struggle to keep in check for many. But what if any, are the elements of anxiety that can be appreciated? In its most basic form, the root of anxiety is fear, which is also a basic instinct we all possess to warn us of potential threats or danger. Without this instinct, we would not survive. There is also a strong correlation between empathy and anxiety.

Jason offered a fresh perspective regarding his own anxiety that he has lived with since childhood. As a very sensitive boy, Jason felt his feelings and everything around him very deeply. He also had great empathy for others. This sensitivity and empathy that Jason has had since childhood are what he says developed an anxiety in him, which he has seen as a gift at times in his life. Jason says that his anxiety (his “spidey sense” as he calls it) has allowed him to feel things at a deeper level which has also helped him to teleport right into the life of a young teenage boy wrestling with identity or an older teen exploring sexuality in his story-telling. Jason sees his anxiety as a superpower that has made him the most human of humans and helped him to understand and relate to others to connect with them.

When we try to see past some of the negativity surrounding a diagnosis such as anxiety and look for the blessings (or superpowers) in the condition it can help to lighten the burden or powerlessness that often accompanies mental health issues. It is important to take care of ourselves and seek appropriate professional help to keep our health in check, but we can also regain our own power in shifting our perspective to find the good in difficult situations. After all, we are not our diagnosis or condition. Our identities are far greater than any one thing.

Identity is an Amalgamation of Everything

When someone asks “Who are you?”, we often answer with what we do. Whether the answer is a student, teacher, mother, athlete or writer our identities are often strongly linked to what we do for a living or what life has put on us. Identifying with what we do as a profession isn’t necessarily a bad thing until we lose that thing we did as a profession. We often see professional athletes go into crisis when they can no longer play their sport, or mothers who have invested 18 years completely into their children and then feel lost when their children are grown up and gone. If identity is purely linked to what we spend most of our time currently doing, we are all at risk of an identity crisis at any moment.

When I asked Jason about his life as a writer, he stated that he does not identify as a writer, but as a storyteller who writes for a living and writes because he loves to write. He expanded by stating that the only reason his writing exists is because of his entire life of experiences that he writes stories about. Jason said writing is actually a very small part of him as he is an amalgamation of the many things and people and places he has experienced that have all stuck on him.

What really got me is when Jason said “I am who I am most in the shower”. This is another lesson his mother taught him, saying that we all have 3 lives: public, private and secret. And it’s the secret one we try to pretend doesn’t exist.. but that is who we are. When we are in the shower, when no one is looking, that is who our truest self is. And that is where we find our identity.