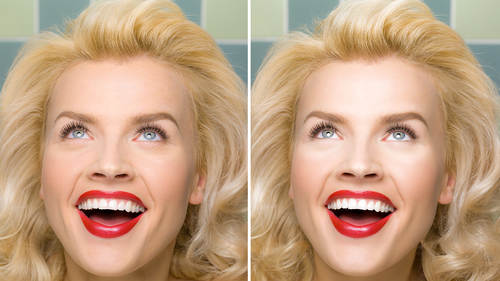 How to Use Filters on Skin Retouching

How to Sharpen Eyes

Someone retouched this stock shot and it's all perfectly porcelain pore-y things. Not my cup of tea and that's fine, but this is an excellent resource file. ♫ For someone like me (audience chuckling) Alright, so, what do I mean by that? We're gonna talk about using someone else's skin to fix this skin, right here. I do it on myself so I'm not insulting you first. This file's not as retouched as some of the other ones. It was kinda basic. How do you do this wondrous trick you're talking about? Well let me tell you. What you do is drag the beauty skin file in that you bought off Adobe Stock or you get your credit, you can do it from there, when I do that, I put it on 50% opacity and I get it more or less in the right position. Obviously we have some different bone structure here. Another class I will show you how to cheat people's chin lines. (chuckling) I know how to do that too. Alright so I'm not gonna worry about the lips so much 'cause the chin area's not too bad but it's really for...

Lisa Carney will go over the basic formula, demystifying the process so that you can incorporate Frequency Separation into most of your portrait and retouching jobs. She'll show how to incorporate filters, paint and blend modes to really make your portraits sing. Learn how to utilize this powerful technique for more of your heavy lifting retouching needs.

Frequency Separation Before and After

Magic Lisa is the best teacher. She makes learning Photoshop fun. Great course. Lisa has a great teaching style. She mixes in a great speech cadence, great voice up and down and pausing, jokes, and is extremely knowledgeable and fun to watch. Awesome course.

I thought this course was absolutely excellent; Lisa's style of teaching worked perfectly for me. I loved how she related what she was doing to how a professional might incorporate the methods into their workflow with clients (and without, when they're doing it for themselves only, such as a photographer). She mentioned at the top of the course that this is an advanced workshop, so she wasn't going to be detailing all of the shortcuts, assuming that those who are taking this course either (a) know them already or (b) are savvy enough to look up the basics via the help topics in PS. (Super easy to do.) Lisa demystified the process for me, made it very approachable and doable, and I had fun listening to her. Would highly recommend.

This technic is awesome. I do not do portrait, but I use it to clean pave roads and trucks. It save me a lot of time and I can be so much more creative. Lisa is wonderful and I love her teaching. Congratulations Lisa, good job!