How to Make Photography Books and Magazines 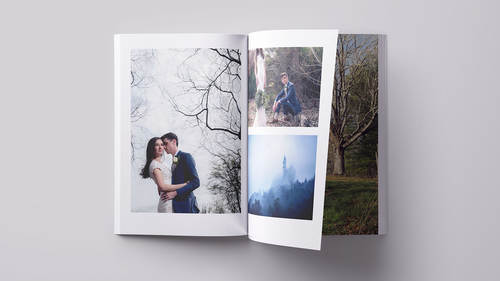 How to Make Photography Books and Magazines

This class is all about making books and magazines, and we're gonna show you to how to do it in two different places. You can do it inside of InDesign, which is kind of the industry standard page layout program, or you can do it right inside of Lightroom, which is the industry standard photo organizational program, but it has a lot of other bells and whistles with it. So we're gonna look at both of those programs, and teach you how to do things. But before we teach you how, I thought we would discuss a little bit of why. The world today is very digital. People are delivering images on phones, they're delivering them on discs. In fact, discs is almost old school now, and now it's a Dropbox, or it's a thumb drive that's like the, is the most physical some people get with their photographs. And then everything else is digitally delivered in some app on the phone, or something like that. And we're losing something in that. I think we're really losing a very vital part of interacting with p...

Join Jared Platt and learn how to design beautiful custom books and magazines in Lightroom and InDesign. But of course, there is more to creating a great book than the technical how-to. In this class, you will not only learn how to create a book and magazine with your images, but you will also learn the thought process behind creating a solid book design with lessons on storytelling and real-world, practical ideas for your next book or magazine. With your new ideas and technical skills, you will be ready to create digital and physical books and magazines that will captivate and impress your followers and clients, helping you stand out for the digital noise.

In a digital world, with BILLIONS of images flooding the internet and crowding your audience’s phones, the white noise is deafening and it is very hard to stand out. But with more and more digital shoot and burn based photographers, there is one way to really stand out. Beautifully printed images can make an impression, but even better than one photograph on the wall is a thoughtfully designed book full of imagery and text. Handing one of a kind book to your client will create a lasting impression and ensure your images have a place in their daily life, and not just in their private phones. Books and magazines can also be an incredibly effective marketing tool when building relationships with prospective clients, museums, art directors and the general public. And of course, there is no better way to enjoy your own personal work and share it with your friends, family, and fans than in a book or magazine form. Not only do tactile books stand out in a sterile digital world, but a book or a magazine (digital or physical), puts the photographer in control of the audiences’ experience, allowing the photographer to present a true narrative and lead the viewer through a tightly controlled story.

Jared Platt is a professional wedding and lifestyle photographer from Phoenix, Arizona. Jared holds a Masters of Fine Arts in the Photographic Studies and a Bachelors of Fine Arts in Photography from Arizona State University and has been a professional photographer and college educator for the past 12 years and has been a speaking, debating and lecturing for the past 17 years. His attention to detail and craft make him a demanding photography instructor. Jared has lectured at major trade shows and photo conferences as well as at universities around the world on the subject of photography as well as workflow. Currently, Jared is traveling the United States and Canada teaching and lecturing on photography and workflow. Join him online for monthly "Office Hours" at www.jaredplattworkshops.com.

I thought I had my book printing processes all figured out, but now I'm going to have to rethink the products I offer to clients and the ones I use to market myself. Aside from introducing me to a print company I didn't know about, Jared walked through areas of Lightroom that I've never even ventured into before. It is insane how easy and approachable he made it seem to design and print with Lightroom and InDesign. I definitely recommend this class!