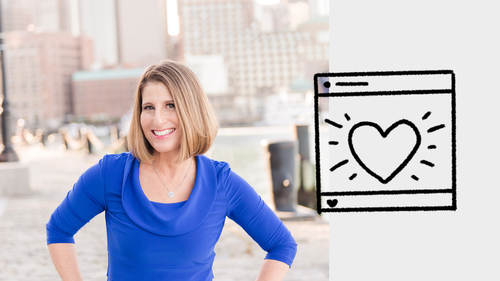 Define Aesthetics for your Feed

You really need to seek out new hashtags that will engage new people during your launch, okay? So where are they hanging out? Remember, we talked about this earlier. Where are they hanging out on Instagram? And you need to really dig deep into the hashtags. This exercise alone will take you hours, if you do it correctly, is researching hashtags. So let's look at this, you guys. For those of you that don't know, the Explore tab is where you wanna go. And up here, where it says Search, this is where you wanna search your words, okay? So, I live in Boston and I'm gonna search Boston businesswomen. So what pops up? That's the first hashtag, and then other relevant hashtags pop up that might be interesting for me to use or consider, given what I'm searching. And, if you're using the right hashtag, then you're showing up in the top nine. And as you can see, in Boston businesswomen, with over 10.9 thousand followers, I have all, the top 12 photos are my photos that show up there. Now, you mig...

Sue B. Zimmerman, aka the #InstagramGal and #TheInstagramExpert, is an Online Business Promotional Expert and a master at Instagram for Business. She teaches entrepreneurs, business execs, and marketing professionals how powerful Instagram for business can be. Sue B. is the
SEE INSTRUCTOR'S CLASSES

Cat in the Moon Photo

Can I just say, "I LOVE Sue"! I took her three day course on CreativeLive back in January when I had finally decided that I didn't want to be the only photographer NOT on Instagram. I took that class knowing absolutely NOTHING about the platform and by the end of it, I was up and running. When I heard that she was doing a new class, I knew I had to see it. By the end of the day my head was exploding with information. There are so many new things on IG that I am already WAY behind the times and have so much work to do. Sue delivered the course in true Sue form - highly entertaining and energized. The examples of successful businesses that she uses are so inspirational and make you feel like, "Yes! It IS possible!!" I am sooooo glad I own the course, because there is no way I could get the full benefit from just watching it once. I will be going back to this class MANY times as I develop as an Instagrammer!

I love Sue's energy and her passion for her work is contagious. She is animated and articulate, making learning about Instagram not only fun, but inspiring. I found her tips to be very intuitive and easy to implement if you have the desire and drive to take your Instagram to the next level. I'm at a point where I've grown my Instagram to a respectable amount (13K), but I want to take it to the next level, so I'm doing a one-on-one consultation with her. I really appreciate all the work she's done into creating a program to uplevel your Instagram game.

Amazing class, super helpful for understanding how to make your Instagram work for your business. And Sue B is engaging and fun to listen to. But make sure you have a pen and paper ready, because there's so much important information you're going to want to write it down! I'm about to start again from the beginning and this time take notes!