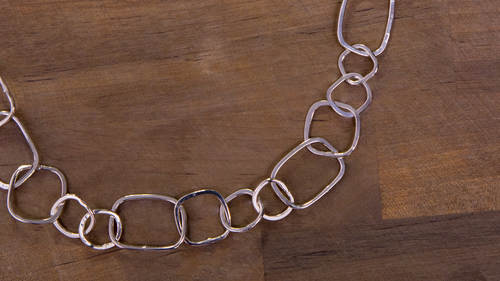 So chain making so the beauty of chain making is once you have this skill you don't have to necessarily by the mass produced chain you can add your own flair to it you can kind of make getting size you want you can um you know, if you're making embellish parts, you can men use unique chain to attach them to it's not necessarily something that has to be a generic it's making it more personal make it more your style, your aesthetic. So this is the piece here that we're going to be making, so I'm gonna talk about the basics of making jumper rings and I'm going to show you and we have most of these sizes, precut, but I'll talk about how you can no set up yourself to make your individual jump brings how to kind of create the shape here that you're seeing little flattened sole detail kind of a little flair to it, and then I'll talk to you about using a certain machine to give it that's nice, beautiful finish that you're seeing here as well as how to solve your links together a little more tr...

I thought Bonnie was very informative, however I didn’t like the camera angles. Most classes I take, the focus is the table and shows the teachers hands. Thank you Bonnie, I enjoyed you short class.