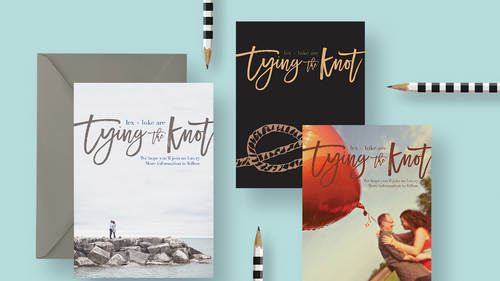 One other thing I was going to make for you is a birthday invitation. I have had the distinct honor of creating my nephew's birthday invitations for a number of years. It's always been a lot of fun, so I thought that would be something fun that I could show you guys how to do and talk to you about. I thought we would create a fun, hand lettered sort of birthday invitation. I have started here with this document. Again, we're gonna just stick with that five by seven kind of a format. This might be a card, so maybe there's a backside that you would wanna create. Or, maybe it's just a photo, you could just have five by seven photos printed up and send that out as your invitation, that would be another option, too. But that's what we're gonna do, is another five by seven kind of format. Let's go back to this card for a minute, 'cause I guess I forgot to tell you, of course, before that you send this in to the printer, you would want to save it. The best way to do that is file, save as. Let...